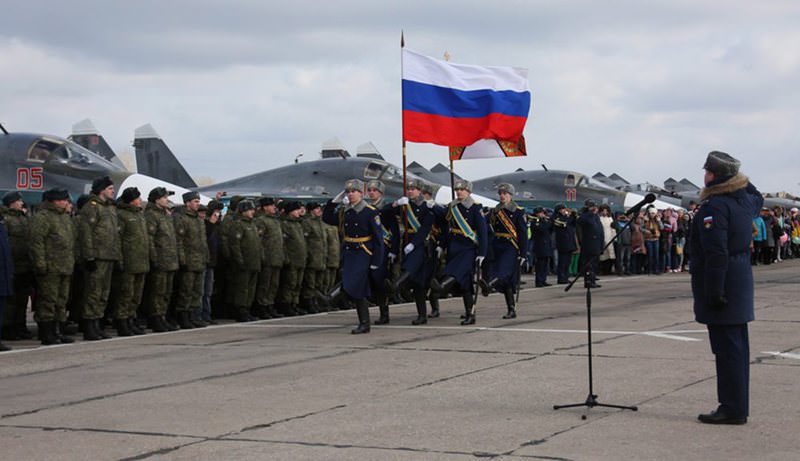 A welcome ceremony for the first group of Russian Su-34 bombers and military personnel returning from Syria upon their arrival at the airbase in Voronezh.(AFP PHoto)
by Merve Aydoğan Mar 16, 2016 12:00 am

Russian President Vladimir Putin announced on Monday that Russian troops are starting to withdraw from Syria and added that the military intervention had largely achieved its objectives. Experts have speculated that Putin's motivation for the withdrawal came after achieving the key goal of bolstering Syrian leader Bashar Assad's regime and preventing its collapse. At a meeting with his defense and foreign ministers Putin said that the withdrawal will begin on Tuesday, and he ordered Russia to intensify its role in the peace process to end the conflict in Syria. Putin said the move should help serve as a stimulus for Syria's political talks, explaining that he coordinated the move with Assad. However, Putin said that the Russian airbase in Hemeimeem in Syria's coastal province of Latakia and a naval facility in the Syrian port of Tartus will continue to operate. Russia expert Dr. Vügar İmanbeyli, who is an academic at Istanbul Şehir University, said: "Many Russian planes and special forces will stay, as Russian officials noted. So it is not a full, but a partial withdrawal."

Russia began air operations in Syria on Sept. 30 after receiving parliamentary approval. The Kremlin claimed the airstrikes, which were followed by military buildup in Syria, aimed to support forces loyal to Assad, a long-standing Russian ally, against DAESH. However, since the beginning of its air campaign in Syria, Russia has come under mounting international criticism amid reports that it has been targeting civilian areas that opposition groups control in efforts to support the regime. According to comments published on Monday by Eurasia Group experts, the withdrawal "move and Putin's accompanying statements emphasizing Russia's support for diplomacy indicate the Kremlin seeks an improved image." Similarly to the Eurasia Group experts, Russia expert İmanbeyli spoke with the Daily Sabah on Tuesday and contended: "With the partial withdrawal, Putin is again trying to weaken the international isolationism around Russia."

As the experts said that Putin has achieved a key goal of bolstering Assad and preventing collapse of his regime, the Eurasia Group experts further provided reasons for the withdrawal: "It is certainly no coincidence that Putin played this card on the very day that U.N.-sponsored peace talks resumed. Putin is quite apparently pressuring Assad to meaningfully engage in talks with the goal of reaching a near-term power-sharing arrangement and longer-term constitutional reform and elections." Additionally, İmanbeyli said that another reason for Putin's decision "in internal politics might be the deterioration of the economy and rise of some latent feelings in the public." He further said that Putin achieved his goal in Syria as the "Russian intervention has radically changed the situation on the ground and the position of moderate opposition groups has been weakened to the extent that they cannot challenge the Assad regime."

Eurasia Group experts said: "The move may affect European actions later this year or early in 2017," and İmanbeyli said: "The main global purposes of the Russian intervention in Syria in September 2015 was to make a change in regional politics and, through this, force the U.S. and EU to talk to Russia, and then bargaining the Syrian issue to lift the sanctions on Russia due to Ukraine. However, after five to six months in Syria, Putin failed to break a siege." A few days ago the U.S. prolonged the sanctions for one year. The EU, "without discussions," did so recently for the next six months. Therefore, Putin has changed his tactics to try to break "a siege."The experts from the Eurasia Group said: "We do expect a reduction of assets that will limit Russia's offensive military capabilities in Syria." İmanbeyli said: "The partial withdrawal of the Russian military will not change the balance on the ground." Commenting on the question of a possible easing of relations between Turkey and Russia after Putin's move, İmanbeyli said that it would be quite difficult. "It will be very difficult to soften relations between Turkey and Russia after this event because the developments after the jet crisis were enormously damaging to the Turkish-Russian relations," he said. He added that there is a lack of confidence between Turkey and Russia and that "in regional politics, Moscow and Ankara's interests continue to clash. On the other hand, Moscow has imposed economic sanctions on Turkish businesses in Russia. Many Turkish enterprises have suffered from this and this antagonistic atmosphere might not be changed soon."