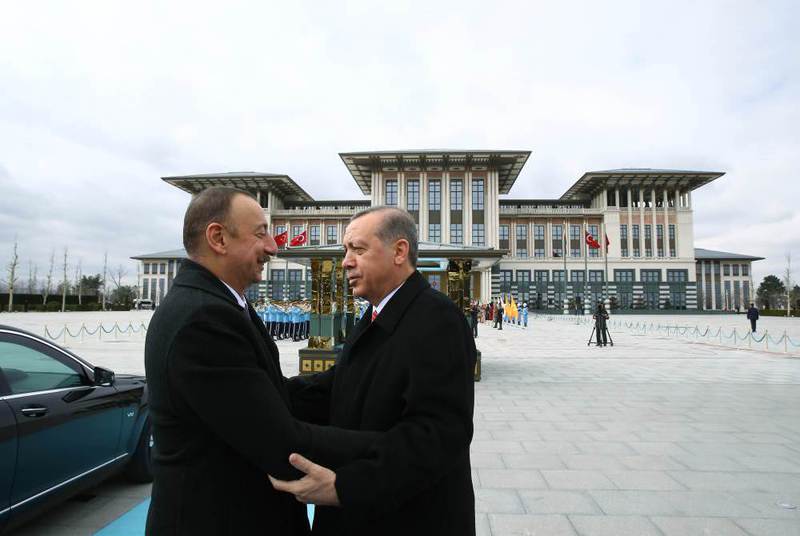 The Turkish and Azerbaijani presidents gave a message of unity and solidarity against the terror that hit Ankara on Sunday that killed 37 and left hundreds wounded. Speaking at a joint press conference after the fifth meeting of the Turkey-Azerbaijan High-Level Strategic Cooperation Council with Azerbaijani President Ilham Aliyev, President Recep Tayyip Erdoğan said that Aliyev's gesture of relocating the meeting to Ankara from Baku was meaningful. "I express this as a manifestation of the 'one nation, two states' perspective like their father [Haydar Aliyev] said. They have shown personally that Azerbaijan is the foul-weather friend of our nation," he said. Quoting presidential sources, media previously reported the high-level meeting was moved to Ankara from the Azerbaijani capital Baku. The reason for this was Erdoğan's being forced to postpone his scheduled visit to the country's Turkic neighbor for a second time after the latest terror attack.

Reports also said Aliyev suggested the relocation of the event and Erdoğan thanked him for the gesture. Erdoğan had to cancel his first planned trip to Baku in February after a car bombing killed 28 people a few kilometers from the Prime Ministry in Ankara. Erdoğan was expected to cancel this visit as well hours before the presidency announced Aliyev would instead visit Ankara for the meeting.

Erdoğan said: "Those who present supporting terror and taking terrorists under their wing as freedom and those who rally for political interest even before burying our dead must have the necessary lesson from this message of brotherhood."

He also said that the attack on Sunday was against all of Turkey and its 79 million people: "The terrorist organization has shown its brutal and mean face with this attack."

He also said those who use terror to vanquish Turkey will never be able to accomplish it and they will have to "fall to their knees" in front of the country.

"Hopefully we will overcome these problems as a nation with the support of friendly and brotherly countries. We are building a new Turkey all together, and we will do so. I want to thank all my Azerbaijani brothers, including my dear brother Aliyev at first on the behalf of my nation."

He also added that they will continue to stand with Azerbaijan in all spheres, including the Nagorno-Karabakh conflict.Indicating that Turkey has always appreciated the progress that Azerbaijan had made in the lat 25 years, Erdoğan also praised Aliyev for announcing 2016 as the "Year of Multiculturalism."

He said: "I believe that in a process in which Islamophobia, xenophobia and racism are on the rise, the seventh meeting of the Alliance of Civilizations as a global forum will give a different message from Baku."

Erdoğan also said that they will host Aliyev at the summit of the Islamic Cooperation Organization (ICC) in Istanbul and that they will continue to meet with him at international meetings in the forthcoming days.

Speaking after Erdoğan, Aliyev said that Azerbaijan will never forget that Turkey is the first state that recognized it and the two countries are the closest allies in the world. He said: "During Mr. Erdoğan's rule, Turkey has become a center of attraction and has grown up. Its growing will make us happy, mostly since we are also growing as Turkey does."

Although the meeting was to evaluate the latest work for the Trans-Anatolian Natural Gas Pipeline (TANAP) project, they also discussed bilateral cooperation in energy, transportation, defense and military issues and the two countries signed six agreements, Erdoğan said.