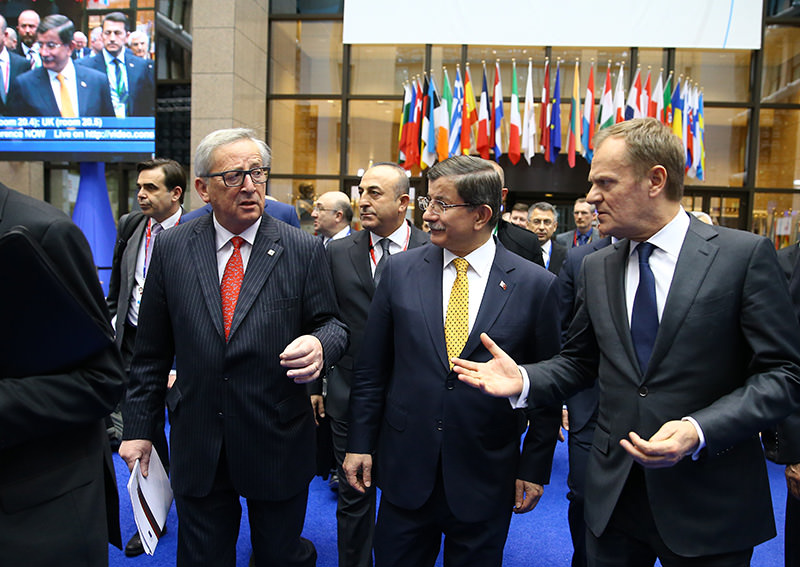 All 28 members of the European Union and Turkish delegation led by Prime Minister Ahmet Davutoğlu on Friday agreed to close in on an agreement to send thousands of refugees back to Turkey, while the country will receive 3 billion euros to spend on 2.8 million Syrian refugees in the country. An extra 3 billion euros will be allocated by the end of 2018 and together with EU agencies, the UNHCR will be participating in organizing the spending of the EU funds.

Speaking at a joint press conference in Brussels with Davutoğlu, EU President Donald Tusk said, "Today we have a balanced proposal, including the concerns of [Greek] Cyprus." Due to objections from the Greek Cypriot administration, EU member states could only agree to open one chapter to bring an end to the deadlock on Turkey's accession to the 28-bloc union.

Davutoğlu said the sides agreed to share the cost and burden of the refugee crisis in a "fair manner" and added that without solving the Syrian crisis the migrant issue in Europe will still be a problem for the union.

"We shared our concerns, views and agreed that the EU and Turkey have a mutual fate. Our relationship is not crisis management but a vision that has deeper cooperation. The agreement is about preventing human smugglers, illegal migration and an end to the deaths of children, women and other innocent people. This deal is very fair and encourages steps for those refugees who are looking to settle their problems," Davutoğlu said, while adding that the EU will accept one refugee for every refugee that is sent back to Turkey.

Ankara previously demanded the union to open five chapters, but the EU leaders could only agree to open Chapter 33, which is about budget and monetary policies. However the deal also highlights that opening of other chapters will be accelerated. Although, the deal is expected to stop illegal migration to Europe, the flow of those who escape clashes in the region is not going to stop.

Under the terms of the plan, the European Union would take in one Syrian refugee from Turkish soils in exchange for every Syrian readmitted to Turkey from Greece, a move meant to discourage refugees from risking their lives in smuggler boats.

Meanwhile, Greek-Cypriot President Nicos Anastasiades, who previously said he would oppose the deal if Turkey fails to recognize their administration, said that he accepts the latest draft of the EU-Turkey refugee deal. "He said he was happy, he accepts the proposal and thanks the negotiators," an EU diplomat said of Anastasiades.

Speaking to reporters in Brussels ahead of a meeting with EU leaders, Davutoğlu said: "For us, for Turkey, [the] refugee issue is not an issue of bargaining, but an issue of values, all humanitarian values, as well as European values."

"Turkey has received 2.7 million refugees, without any significant assistance from anywhere," he added. "And today I also want to re-emphasize that Turkey will continue its policy, to have this attitude of humanitarian perspective."

Under Turkey's proposal to the EU, the country wanted the 28-nation bloc to "share the burden" based on a formula of "for every Syrian readmitted by Turkey from the Greek islands, another Syrian will be resettled from Turkey to the EU member states."

Turkey is hosting the largest number of Syrian refugees in the world and has spent more than 7 billion euros meeting their needs, according to European Commission figures released last year.