Erdoğan, Biden meet under shadow of US support of PKK affiliate PYD 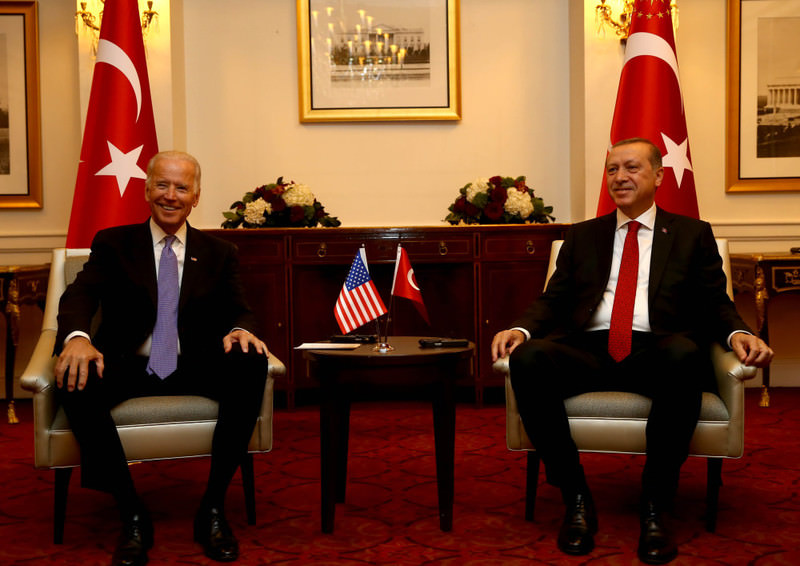 The meeting between President Erdoğan and U.S. Vice President Biden was held in a cordial atmosphere but the fact that the U.S. sees the PKK Syrian branch PYD as an ally against DAESH cast a shoadow on the proceedings

President Recep Tayyip Erdoğan met with U.S. Vice President Joe Biden on Thursday before the start of the Nuclear Security Summit. But the warm greeting was clouded by the U.S.'s position on the PKK Syrian affiliate Democratic Union Party (PYD), which Washington sees as an ally in the fight against DAESH. The meeting, also attended by Deputy Secretary of State Tony Blinken, Assistant Secretary of State for European and Eurasian Affairs Victoria Nuland and Special Presidential Envoy for the Global Coalition to Counter DAESH Brett H. McGurk on the American side and Foreign Minister Mevlüt Çavuşoğlu. Foreign Ministry Undersecretary Feridun Sinirlioğlu, National Intelligence Organization (MİT) Chief Hakan Fidan and presidential spokesman İbrahim Kalın on the Turkish side.

The meeting was held at the St. Regis Hotel where Erdoğan is staying. McGurk's attendance, whose previous meeting with PYD officials, including a former PKK member, had received serious criticism from Turkey, was seen as a sign that the PYD would be a topic of discussion at the meeting. Turkish officials speaking before the meeting said Turkey perceived the PYD and its armed People's Protection Units (YPG) not only as an affiliate of the PKK terrorist organization, but also a proxy of the Russian-Assad alliance. They stressed that Ankara has big concerns about the groups, which are seeking to create an autonomous region along Turkey's Syria border. Officials also expressed Turkey's disappointment over the U.S.'s unchanged position on the PYD.

Reports said the meeting with the delegation lasted an hour and the two leaders had a private 30-minute exchange afterward. Erdoğan was later expected to attend a dinner hosted by U.S. President Barack Obama as a welcome to world leaders gathering for the Nuclear Security Summit.

Kalın, speaking after the meeting, said the U.S. was determined to keep Syria in one piece and was opposed to the PYD's declaration of federation. He also said Biden had pledged to increase anti-PKK cooperation with Turkey.

On Wednesday, President Erdoğan also held a bilateral meeting with U.S. Secretary of State John Kerry at the Turkish Embassy in Washington. During the meeting, the two discussed Turkish-American ties and touched on the global terror threat and the current refugee crisis. Foreign Minister Çavuşoğlu also attended the meeting, which lasted around 45 minutes.

Turkish-U.S. relations have gone south following a statement from U.S. State Department spokesman John Kirby early February that the U.S. does not consider the Syrian PKK affiliate PYD and its armed People's Protection Units (YPG) to be a terrorist organization. Kirby's statement was in response to President Recep Tayyip Erdoğan's ultimatum to Washington to choose either Turkey or the PYD as its ally. Even though Ankara repeatedly warned the U.S. and Europe that there cannot be any good or bad terrorists, pointing to the YPG, the U.S. disregarded Erdoğan's last call and designated the YPG as its "partner."