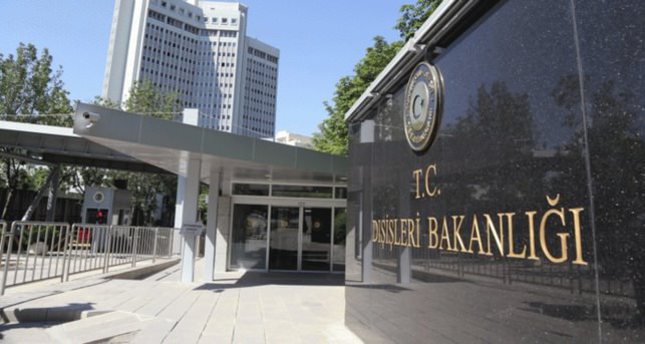 Turkey's Foreign Ministry condemned Armenian attacks on Azerbaijani soldiers in the Nagorno-Karabakh region, which has suffered Armenian occupation since 1994.

The statement said, "We condemn the artillery fire launched against Azerbaijan along the line of contact and the attacks by Armenia affecting also the civilian population on the night of April 1-2. We wish God's mercy on our fallen Azerbaijani brothers, patience to their relatives and a speedy recovery to the injured. We invite Armenia to observe the cease-fire and immediately put an end to the clashes."

Touching on the Armenian occupation, "For about a quarter century, Armenia has been occupying one-fifth of Azerbaijan's territory. Unless this occupation comes to an end and until Armenia abandons its aggressive stance, unfortunately, the risk of experiencing similar clashes will continue. In this regard, we reiterate our call on Armenia to put to an end the occupation in peaceful means, in line with the relevant U.N. Security Council resolutions," the statement read.

The statement also stated that Turkey will continue backing Azerbaijan in its struggle with Armenia, saying that "As a member of the OSCE Minsk Group, established for the settlement of the Nagorno-Karabakh conflict, Turkey will continue to support the efforts for reaching a just and lasting solution within the territorial integrity and sovereignty of Azerbaijan."

President Recep Tayyip Erdoğan has also vowed to back Azerbaijan and said he held a telephone conversation with Azerbaijani President Ilham Aliyev. During his visit to Washington, D.C. he told reporters, "Turkey will back Azerbaijan to the end." He criticized the international community for not taking the necessary steps to prevent the escalation of violence.

Prime Minister Ahmet Davutoğlu has also called Aliyev and offered his condolences for the killed Azeri soldiers. Foreign Minister Mevlüt Çavuşoğlu and National Defense Minister İsmet Yılmaz have held phone conversations with their Azerbaijani counterparts regarding the situation and extended their condolences.