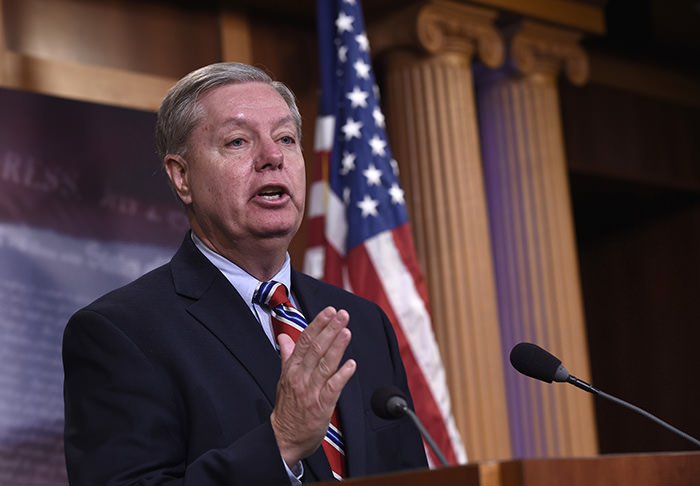 U.S. Republican Senator Lindsey Graham criticized United States President Barrack Obama on foreign policy issues related to the Middle East, saying that the use of the People's Protection Units (YPG) in the fight against DAESH in Syria was not an effective strategy.

Speaking to reporters in a press conference at the Senate after his visit to the Middle East, Graham said: "Turks see the YPG as cousins of the PKK. I expressed it many times at the Senate that using the YPG is never going to be a winning strategy in the fight against DAESH. This is not a strategy that will destroy DAESH."

Known as one of the more hardliner Republican senators, Graham has been one of the strongest critics of the Obama administration's strategy in Syria, particularly in the fight against DAESH.

"The Kurds being trained in Syria will later become a problem along the border. I cannot express to you enough how much Turkey is not happy with our Syria policy," Graham added.

Graham also said that U.S. efforts in Syria were not strategic enough to replace Syria's Bashar Assad, adding that the failure in the fight against DAESH has leveraged Russia and Iran in keeping Assad in power for a longer period. He also said the "failure" in the Obama administration's foreign policy will fuel future conflicts in the region.

During his visit to the Middle East, Graham also visited Turkey, during which he praised Turkey's humanitarian efforts made for the nearly 3 million Syrian and Iraqi refugees in Turkey, saying that the refugee camps were some of the best he had seen.

He also said that the international community does not pay enough attention to the humanitarian aspect of the civil war in Syria. He said that even if Assad was replaced right now, the situation for the refugees who would go back to Syria would be disastrous due to insecurity and the clashes between rebel groups in the country.

While Ankara asserts that the Democratic Union Party (PYD) is affiliated with the PKK, a designated terrorist organization by the U.S., EU and NATO, Washington does not share Ankara's concern.

Defending the PYD because it fights DAESH on the ground in Syria, Washington has brushed off Ankara's concern about the group. Even though the U.S. says the YPG is the only effective force fighting DAESH on the ground, Ankara reiterates that there cannot be any distinction of good or bad terrorist organizations.