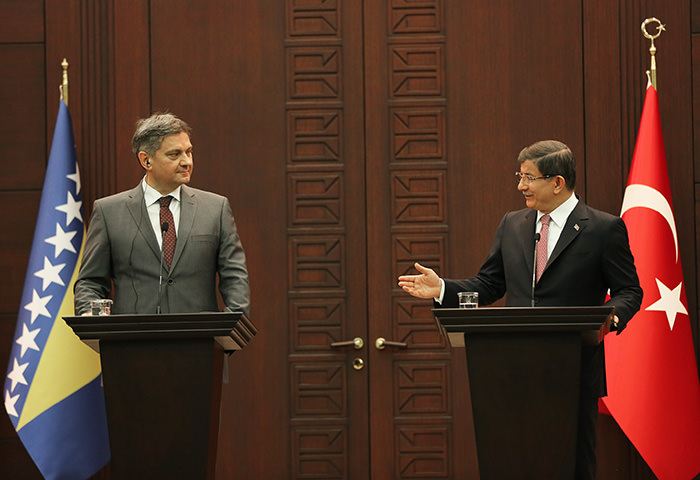 Prime Minister Ahmet Davutoğlu said that Turkey always encourages friendly relations between the nation of Bosnia and Herzegovina and its two neighbors Serbia and Croatia.

"We place great importance on continuation of the Turkey-Serbia-Bosnia triple mechanism in the most effective way," said Davutoğlu.

Zvizdic arrived in Ankara for a three-day official visit on Thursday.

Davutoğlu said they had very important meetings in the context of both the timing of Zvizdic's visit to Turkey and regional developments.

"Bosnia-Herzegovina's peace, stability and prosperity are one of Turkey's primary goals in the Balkans."

"Bosnia-Herzegovina's stability brings stability to the Balkans. A crisis in Bosnia would mean experiencing the greatly painful memories that happened in the 1990s once again. Despite the passage of 20 years, I still felt great pain at the last commemoration ceremony [of the Bosnian massacres] I attended. No matter the conditions, Turkey will always stand with Bosnia-Herzegovina," said Davutoğlu.

Meat imports from Bosnia to continue

Davutoğlu announced that meat imports from Bosnia will continue with the already confirmed extension of the quota.

Davutoğlu also pointed to Turkey's important work in culture and tourism in Bosnia.

"The Turkish Cooperation and Coordination Agency (TIKA) and the related deputy prime minister are carrying out extensive hard work on restoration of the destroyed, damaged heritage. We put so many efforts into reconstruction of the Ferhadija Mosque, Sultan's Mosque, and many others."

For his part, Zvizdic said that his visit would focus on finding ways to boost cooperation with Turkey.

"Projects such as meat exports have made very important contributions to the sector as well as generally to Bosnia-Herzegovina. During our meeting with Prime Minister Davutoğlu and government ministers, we have also discussed this topic. We stated all the opportunities that Bosnia can offer. We have come here with more than 100 projects in five areas that are very important for us. These areas are energy, transportation, agriculture, wood, and metal industry. We also had a 28 percent rise in tourism last year," said Zvizdic.

"In order to ensure justice in Bosnia-Herzegovina, firstly the historical facts need to be addressed correctly. Otherwise peace would not be possible to achieve. No matter how bitter it would be to accept the facts, we need to establish history based on these facts," said Zvizdic.

The 61-year-old Serbian nationalist leader and former deputy prime minister had faced three counts of crimes against humanity and six counts of violations of the laws or customs of war.

"I cannot speak officially on the decision, but I can tell you personally that the acquittal of Chetnik leader Vojislav Seselj does not reflect what happened in Bosnia," he said.

He added, "The genocide in Srebrenica has been recognized worldwide. These people should not be responsible for only one act in Bosnia, but must be responsible for the all genocides carried out. We need to accept the truth as it is. Otherwise it is not possible to achieve real safety. I can say that the decision on [former Serbian leader Radovan] Karadzic [finding him guilty on most genocide charges] wounded so deeply the victims of the genocide. The decision was not enough to improve the relationship and close the wounds that have been opened in the past acts," said Zvizdic.