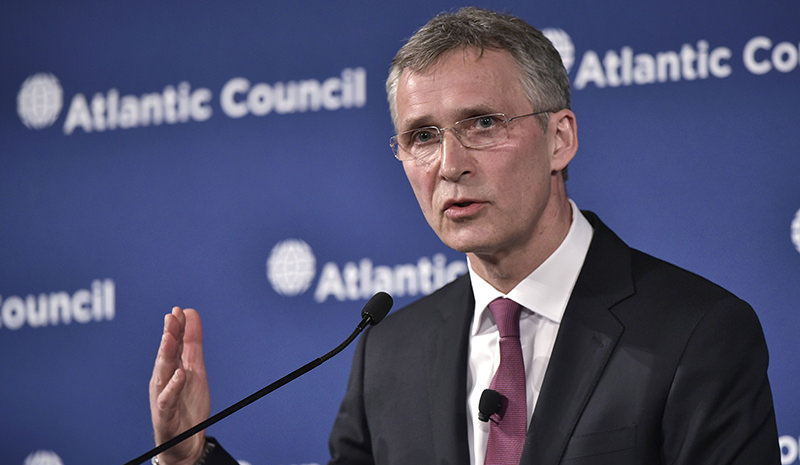 NATO Secretary General Jens Stoltenberg speaks during an Atlantic Council discussion on NATO and stability on April 6, 2016 at a hotel in Washington, DC. (AFP Photo)
by Anadolu Agency Apr 07, 2016 12:00 am

"Without Turkey it would have been much more difficult to, for instance, conduct many of the airstrikes and so on fighting Daesh," he added.

Crucially, Turkey is the NATO ally "most affected" by an influx of refugees prompted by conflicts in neighboring Iraq and Syria, Stoltenberg said.

"We are also responding to the conflict in Syria by supporting Turkey - bordering Syria and Iraq, we have assurance measures, NATO presence in Turkey," he said.

Around 2.7 million Syrians who have fled the country's ongoing conflict are being sheltered in Turkey.

Regarding Russia, Stoltenberg said that Moscow does not pose an "imminent threat" to NATO security, but said it invests in and uses increased military capabilities, particularly in eastern Europe.

"What we see is a more assertive Russia responsible for aggressive actions in Ukraine and willing to use military force -- not only invest in Russian military capabilities, but also that willingness to use those capabilities to intimidate neighbors, to change borders in Europe - annex Crimea, destabilizing eastern Ukraine, and having troops in Georgia, in Moldova and so on," he said. "This is of course why we are responding."

Stoltenberg said NATO has made "significant progress" in its response efforts. "NATO is becoming more agile, and we are increasing our readiness," he said, adding that it is "the largest reinforcement of our collective defense since the end of the Cold War.

"NATO's response force is now three times bigger than it was before with a brigade-sized high readiness force at its core," he added.

Turkey's downing of a Russian jet after it had violated Turkish airspace "underlined just how important it is that we do our utmost military to military communications, to have expansive predictability, to avoid that kind of incidents", he said, and added: "Dialogue is not weakness, dialogue is strength."