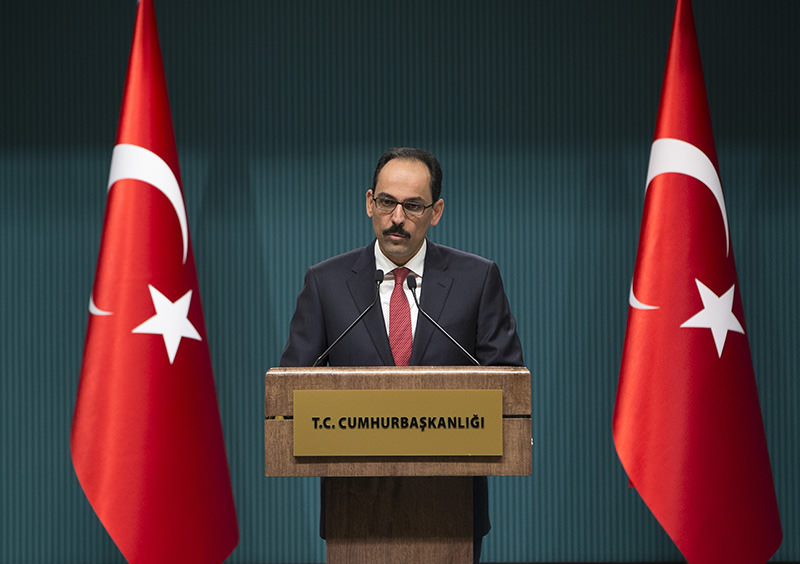 Turkey will not drop its demand for an end to the Israeli blockade of the Gaza Strip in order to normalize relations with Israel, presidential spokesman İbrahim Kalın said Monday.

"What happens in Gaza is unacceptable, the occupation by Israel must end," Kalın said, adding that the humanitarian crisis in Gaza must be addressed.

He said that no final agreement on a text for mending ties with Israel had yet been reached and that talks would continue in the coming weeks.

He also indicated that the two sides have reached a certain point on the issue of compensation for the families of the victims of the Mavi Marmara raid in which 10 people were killed and 55 were wounded by Israeli forces.

The Foreign Ministry said on Friday that Turkish and Israeli delegations had made progress toward finalizing a deal in talks last week.

The Haaretz newspaper in Israel also reported that the talks in London lasted well into the night, ending just before midnight.

There has been concrete progress over the last couple of months in restoring bilateral relations, long-stalled since the Mavi Marmara raid.

Turkish and Israeli officials first met in December 2015 and reached a preliminary agreement to normalize relations, including the return of ambassadors to both countries, after Israel agreed to pay $20 million in compensation to the relatives of the victims of the Mavi Marmara raid. During the meeting held in early February 2016, Turkish and Israeli officials discussed easing rather than lifting the blockade of Gaza, which Ankara aims to begin rebuilding.

Ankara underscored that relations with Israel cannot be normalized unless its conditions for ending the Gaza blockade and compensation for the deaths of civilians on Mavi Marmara vessel are fulfilled.

The diplomatic crisis between Turkey and Israel dates to May 2010 when Israeli commandos boarded the Mavi Marmara, a civilian vessel carrying humanitarian aid trying to break the Israeli blockade on Gaza, in international waters.

The Israeli government took the first step toward reconciliation on March 24, 2013, when Netanyahu apologized for the mishandling of the raid during a conference call with then Prime Minister Recep Tayyip Erdoğan and U.S. President Barack Obama. Since then, closed-door reconciliation talks have continued, but the agreement has been delayed due to perpetual local, general, presidential and early elections in Turkey and Israel's attack on Gaza in 2014.

Touching on the Russia-backed Syrian regime operation in Aleppo, Kalın said it is a stark example of both Bashar Assad and Russia's insincerity about peace: "We are witnessing violations [of the cease-fire] by the regime. Our concerns about the possible new flow of refugees coming from Aleppo are still continuing.

"On the one hand, you reach an agreement with the contributions and support of the entire international community to stop the conflict and, on the other, you maintain those operations in Aleppo, Idlib and other places with the pretext of fighting DAESH. This is, of course, unacceptable."

Regarding Ankara's position on the Democratic Union Party (PYD) and its People's Protection Units (YPG) militia's role in the field in northern Syria and in the Geneva peace talks, Kalın said that Ankara's position has not changed on the issue and the PYD and YPG are not welcome at the Geneva peace talks as they continue to cooperate with PKK terrorists and the Assad regime.

Ankara perceives the PYD and YPG as the Syrian offshoot of the PKK, and it has long asserted that if the PYD controls the entire area in northern Syria along the Turkish border it would constitute a threat to Turkey's national security.

Following President Recep Tayyip Erdoğan's visit to the U.S. two weeks ago, media outlets reported that the U.S. has persuaded Turkey for PYD to take control in the area between northern Syrian towns of Azaz and Jarablous, including the town of Manbij, which is currently under the ncontrol of Daesh terror organization.

Prefacing that intense diplomacy traffic is ahead in the upcoming period, Kalın said that Iranian President Hassan Rouhani will visit Turkey this week. Saudi King Salman will also be in the country starting Monday. Salman will hold bilateral talks and later participate in the Organization of Islamic Cooperation (OIC) summit in Istanbul as well as Kazakh President Nursultan Nazarbayev. Erdoğan will also pay visits to the three countries next week, Kalın said.

Kalın said that as Turkish authorities, they will closely follow the case of German satirist Jan Boehmermann, who is under investigation by German prosecutors for his defamation and insults directed against Erdoğan on public broadcaster ZDF. He noted that these insults have nothing to do with the freedom of expression and press.