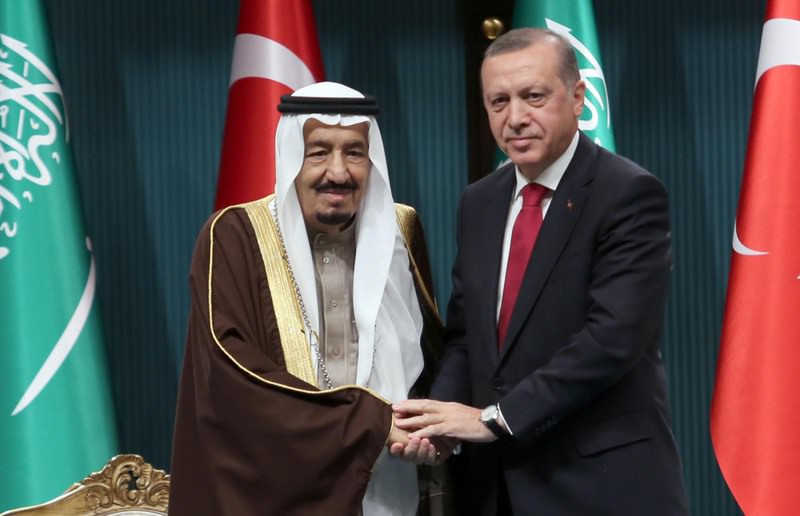 King Salman of Saudi Arabia arrived in Ankara on Monday with a large delegation to start his three-day diplomatic engagement with Turkey. President Recep Tayyip Erdoğan received him at the airport, a gesture in response to Salman's receiving Erdoğan during his visit to Saudi Arabia last April. Following meetings with Turkish officials to discuss regional issues, Salman will attend the 13th Organization of Islamic Cooperation (OIC) Summit in Istanbul starting Thursday. Salman was awarded the Order of State by President Erdoğan, who said the order shows Turkey's high level of appreciation for strengthening ties between the two ally countries.

"My dear friend, since you succeeded to the throne in Saudi Arabia, you have contributed a lot to strengthening friendly relations with our country," Erdoğan said, expressing his appreciation for the two countries' mutual stance on developments in the region. The Saudi king thanked Erdoğan and said his country's relations with the state and the people of Turkey are worthy of commendation. Regional and international issues were reportedly discussed in meetings between Turkish and Saudi officials. The two countries have developed close relations in recent years on issues like the ongoing civil wars in Syria and Yemen as well as Iran's role in regional conflicts.

Turkey and Saudi Arabia differ greatly, however, over relations with Egypt, where the democratically elected President Mohamed Morsi was toppled by a coup led by current Gen. Abdel-Fattah el-Sissi in 2013. King Salman was in Egypt over the weekend as part of an official visit, during which an investment fund of $16 billion was created, along with other agreements totaling $1.7 billion. The two countries also agreed on the transfer of two islands in the Straits of Tiran from Egypt to Saudi Arabia. As the two visits are back-to-back, it is likely that Salman will try to persuade Turkey and Egypt to adopt closer positions in bilateral relations and cooperation on regional issues. Officials from Egypt are also expected to be in Turkey to attend the OIC summit in Istanbul.

Turkish media outlets reported that intensive preparations are underway for the King's visit in Ankara. A hotel in the capital will solely serve Salman and the Saudi delegation, while around 500 Mercedes-Benz vehicles were rented for the Saudi delegation.

In December, Turkey and Saudi Arabia reached an agreement to establish a high-level strategic cooperation council, sources added, to strengthen military, economic and investment cooperation between the two countries.

Attempts to recover relations were first unveiled when Erdoğan attended the funeral for the late King Abdullah in January 2015. After Saudi officials announced the king's death, Erdoğan suspended his African tour for a day and traveled to Saudi Arabia. A day of mourning was also declared in Turkey on the Saturday following Abdullah's death. These gestures were perceived to be indications that Turkey was eager to leave political disagreements aside and foster closer bilateral relations.

Since Abdullah's death on Jan. 23, 2015, Ankara has continued to maintain strong relations with the new king. Erdoğan visited Saudi Arabia in March 2015, in what was described by political analysts as an attempt to mend relations between the leaders of the two countries, having shown their willingness to put political disagreements aside to foster better bilateral relations.
RELATED TOPICS