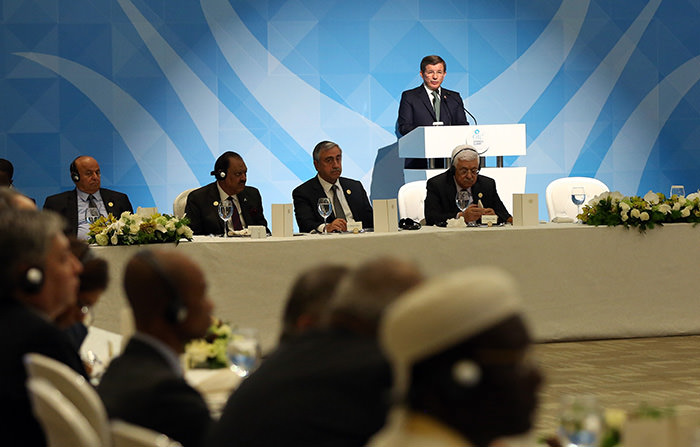 Prime Minister Ahmet Davutoğlu on Thursday called on the Islamic world to put their differences aside and stand against the challenges faced by Muslims as a united front during his speech at the 13th Organization of Islamic Cooperation (OIC) summit in Istanbul.

"Despite differences of opinion, we need to maximize political relations and improve bilateral contacts in maturity so we can discuss all the problems in the Muslim world," Prime Minister Davutoğlu said.

Davutoğlu urged the Muslim community to stand agains terrorism as a unified front and also said that the OIC should work on helping Muslim minorities in areas where they face challenges.

"We have to stand shoulder to shoulder for the liberation of occupied Palestine," Davuoğlu said and added, "The most important indicator which would show the effectiveness of the OIC is protecting Muslim minorities and liberating occupied lands such as Palestine, Karabakh and Crimea."

Turkey is hosting the OIC summit for the first time since the body's inception in 1969. It will lead the bloc for the next two years.

Davutoğlu also warned that some Muslim countries were confronted with the problem of separatism, "We need to compose a principled attitude against the risk of dismemberment of some states."

Meanwhile, the prime minister also called for increasing the economic cooperation between the OIC member states.