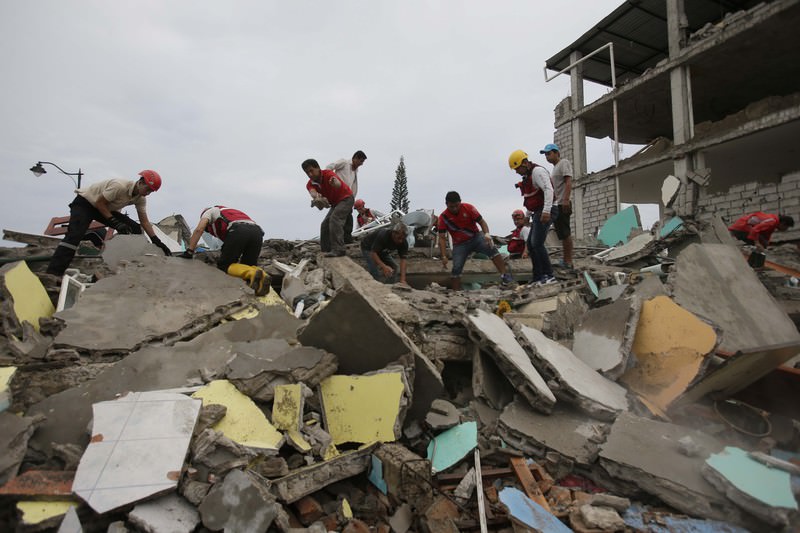 In the letter addressed to Ecuadorian President Rafael Vicente Correa Delgado, Erdoğan said Turkey is sharing the pain of Ecuadorian people while he offered his condolences for the dead and wished a speedy recovery to the injured.

Reminding that Turkey had endured similar pains in the past due to earthquakes, the president said his country is ready to send any aid needed for the South American country to bind up its wounds.

The magnitude-7.8 quake, the strongest to hit Ecuador since 1979, was centered on Ecuador's sparsely populated fishing ports and tourist beaches, 105 miles (170 kilometers) northwest of Quito, the capital.

Vice President Jorge Glas reported the death toll at a somber news conference, while President Rafael Correa flew back from Rome to deal with the crisis.

Glas said there were deaths in the cities of Manta, Portoviejo and Guayaquil — all several hundred kilometers (miles) from the center of the quake, which struck shortly after nightfall Saturday.

Glas said the country had already deployed 10,000 armed forces. In addition, 4,600 national police were sent to towns near the epicenter.

More than 3,000 packages of food and nearly 8,000 sleeping kits were being delivered. Electricity in Manabi province, the hardest-hit, remained mostly down as authorities focused on finding survivors.

The U.S. Geological Survey originally put the quake at a magnitude of 7.4 then raised it to 7.8. It had a depth of 19 kilometers (12 miles). More than 135 aftershocks followed, one as strong as magnitude-5.6, and authorities urged residents to brace for even stronger ones in the coming hours and days.