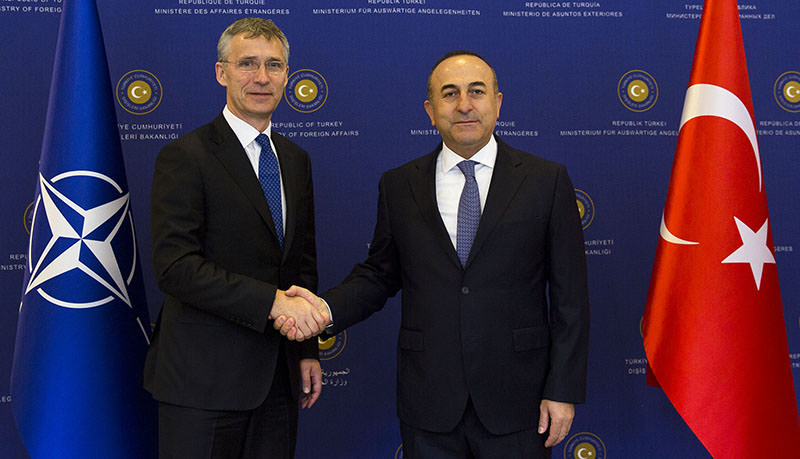 NATO Secretary-General Jens Stoltenberg praised Turkey's efforts to stop the migration crisis and said on Thursday in Ankara that "Turkey plays a crucial role in fighting human trafficking in the Aegean Sea," and added: "Our collective efforts make differences in the migrant crisis." Stoltenberg paid a two-day visit to Ankara where he met with President Recep Tayyip Erdoğan, Prime Minister Ahmet Davutoğlu, Foreign Minister Mevlüt Çavuşoğlu and Defense Minister İsmet Yılmaz. This is the fourth time Stoltenberg has visited Ankara since he assumed his post in October 2014, and this time terrorism, illegal migration, NATO's expansion and the upcoming NATO summit were the major topics he discussed with Turkish officials.

"Figures from different organizations confirmed that the numbers of migrants and refugees crossing the Aegean Sea are significantly down," he said in the press briefing after he met with Çavuşoğlu on Thursday. "I appreciate that we have good cooperation between NATO's standing forces in the Aegean Sea and the Turkish Coast Guard. Turkey plays a crucial role in fighting human trafficking on the Aegean Sea," he added. In response to a question from Daily Sabah about whether NATO is planning to end the sea patrol mission on the Aegean Sea since illegal migration there is down following the March 8 Turkey-EU agreement, he said that NATO's sea patrol missions will continue: "We have seen a significant reduction in the numbers, but it's important not to end these activities too early. We have to stay there as long as it's needed. We do this in very close cooperation with Turkey." Stoltenberg said that smugglers are still trying to bring migrants across the Aegean Sea into Europe and that it is crucial for authorities not to abandon efforts to stop them prematurely.

He also said it is necessary for a peaceful solution to the Syrian civil war and drew attention to Russia's ongoing military presence there. "Despite the announced partial withdraw we still see that Russia maintains considerable military forces in support of [the Bashar] Assad regime in Syria," he said.

Stoltenberg praised Turkey's joint efforts with NATO in the fight against terrorism: "We are grateful for Turkey's contribution in our alliances in so many different ways." Referring to the recent terrorist attacks in Ankara and Istanbul, he said there is no justification for these brutal attacks and that NATO stands in solidarity with Turkey. "We stand united in the fight against terrorism. There can be no justification for the horrific attacks. Turkey has the right to protect itself from all these terrorist attacks," he said.

Çavuşoğlu, for his part, said there is a need for more efficient intelligence sharing among ally countries to counter DAESH. "In our meeting I informed the secretary-general about the PYD [Democratic Union Party] terrorist organization and its links to the PKK," Çavuşoğlu said.

He added that they discussed NATO expansion and that "the Turkish position is very clear on this issue. … We back Montenegro's accession to NATO and, regarding other candidate states such as Bosnia-Herzegovina, Macedonia and Georgia, progress should be made."

"We also talked about actions to be taken against DAESH in Iraq, Syria and Libya. Besides that, we mentioned NATO's support to countries affected by terrorism or neighboring countries like Jordan." Çavuşoğlu said Turkey was ready to fight terrorism in Libya as part of any NATO initiative, as it has in Afghanistan. Stoltenberg left Ankara on Thursday evening.