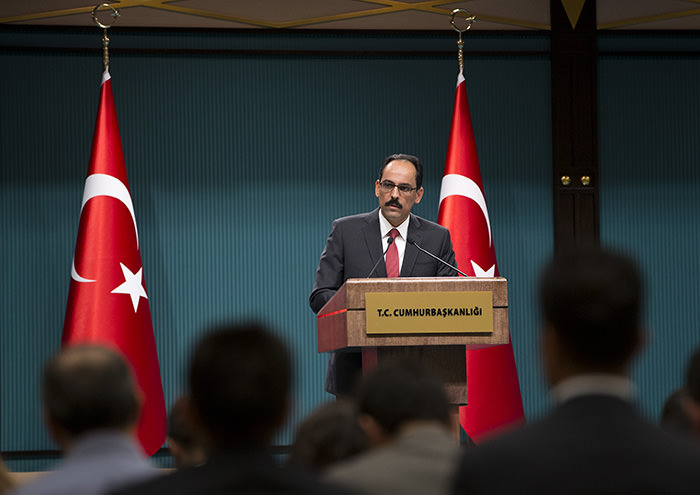 Presidential spokesperson İbrahim Kalın accused on Tuesday some international media organizations of trying to justify the PKK terrorist organization by carrying out interviews with its leaders.

Addressing a press conference at the presidential complex in Ankara Monday, Kalın said: "These efforts aimed at exonerating the terrorist organization have nothing to do with journalism."

"This is nothing but indirect support for the terrorist propaganda."

The spokesman went on to ask what would have been the reaction of countries if a foreign news agency, which is financed with its people's taxes, had carried out an interview with al-Qaeda members and tried to portray its leadership as "reasonable and legitimate actors" following the 2007 terrorist attacks in the U.K.

"Here, we are faced with a very similar situation," he said.

Kalın strongly rejected and condemned any kind of effort to justify "PKK terrorism or any other kind of terror."

Since then, over 400 Turkish security personnel, including troops, police officers and village guards have been martyred and more than 3,700 PKK terrorists killed in operations across Turkey and northern Iraq.

About ties with Israel, Kalın said: "We are about to reach the final step in our ongoing negotiation with Israel. A new contact is planned in the near future."

"As you know, the agreement is planned to be signed and the process of the normalization of ties is also planned to start once there is an agreement on the two articles about compensation [for victims of Mavi Marmara attack] and [Gaza] blockade," he added.

"We expect Israel to take the necessary steps to improve humanitarian conditions in Gaza," he said and added: "A new round talks will be held between Turkey and Israel to normalize relations."

Ties between the two countries strained in 2010 when Israeli commandos stormed the Mavi Marmara, a humanitarian aid ship attempting to lift the blockade of Gaza, in international waters, killing 10 Turkish activists.

Ankara demanded an apology over the incident as well as compensation for the families of those killed and the removal of the Gaza blockade. Netanyahu issued an apology in 2013 but the last two conditions remain outstanding.

Meanwhile, Kalın also commented on the strained relations with Russia, saying, "Turkish - Russian relations are deep enough that it should not be limited to a single incident."

Kalın also gave an update on the number of suspected foreign fighters and extremists deported from Turkey since 2011.

"As of today, over 3,300 suspected foreign fighters have been deported from Turkey, while around 41,000 others have been banned entry," he said.

Separately, some 9,500 foreigners have been spotted by risk analysis teams at airports and bus stations, with over 2,000 of them being banned entry, he said.

"Again, a total of 2,770 people, including 1,232 foreign nationals have been arrested during the nationwide anti-Daesh operations; 954 have been remanded in custody," he added.