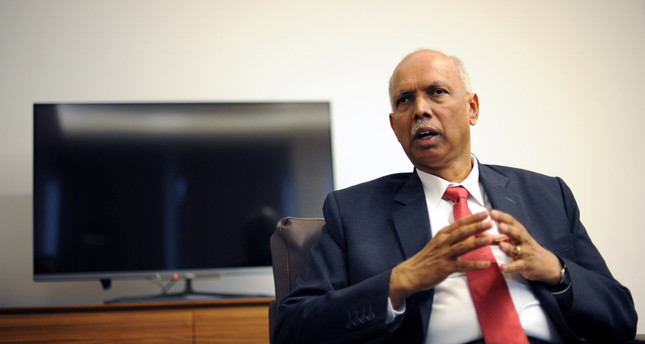 The presence of almost 3 million refugees in Turkey reflects the generosity and compassion of Turkish people and Turkey has been a constructive player in addressing the crisis, Singaporean Ambassador Selverajah said in an interview with Daily Sabah

The first resident Singaporean ambassador in Ankara, Mr. A. Selverajah, said that Turkey has been a constructive player in addressing the refugee problem and in the global fight against terrorism. Speaking to Daily Sabah, Ambassador Selverajah praised Turkey for hosting 2.7 million Syrian refugees and underlined that this reflects the generosity and compassion of the Turkish people. 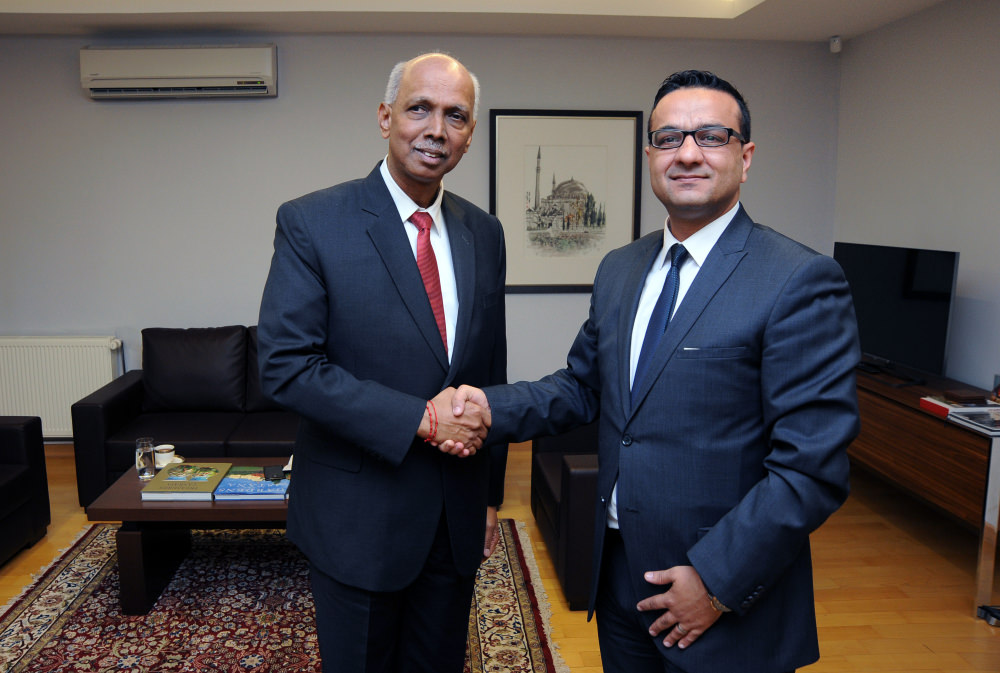 Describing the current level of bilateral relations with Turkey as excellent, Ambassador Selverajah stressed that Singapore and Turkey could increase mutual trade and investment, especially after the new-generation Turkey-Singapore Free Trade Agreement came into effect. Looking to areas where economic relations can improve such as the aviation sector, especially since Turkey is building the third Istanbul airport, Mr. Selverajah added that there is also potential to extend cooperation in the cultural and educational spheres, and increase the flow of tourists between the two countries.

DS: How would you evaluate the current level of bilateral relations, as the first resident Singaporean ambassador in Ankara?

Relations between Singapore and Turkey have always been warm and friendly. We appreciate Turkey's decision to send its first resident ambassador to Singapore in 1985. As a small country, Singapore lacks the resources to set up missions in as many countries as we would like to. However, we decided in 2012 to open an embassy in Ankara and to appoint the first resident ambassador to Turkey in 2015. This is a testament to the growing importance which Singapore attaches to our relations with Turkey.

Singapore's current relations with Turkey are broad-based, and include strong political, economic and cultural relations. There have been several high-level visits between Turkey and Singapore in recent years. President Recep Tayyip Erdoğan visited Singapore in 2014 when he was Prime Minister, and Prime Minister Ahmet Davutoğlu visited Singapore in 2013 as then foreign minister. Singapore's Prime Minister Lee Hsien Loong made a bilateral visit to Istanbul and Ankara in October 2014, during which a Joint Declaration on a Strategic Partnership was signed. We are now working to expand our relationship in the areas identified in this Strategic Partnership Agreement. Prime Minister Lee also visited Antalya for the G20 Summit last November.

With a resident embassy in Ankara and an International Enterprise office in Istanbul, we will strive to further deepen and broaden our relationship. It is my hope that we will be able to build on our achievements in bilateral relations in the past few years, and identify new opportunities and areas for greater collaboration. Given Turkey's growing and dynamic economy and its membership in the G20, I am confident that we will be able to find new areas where our two countries can cooperate for mutual benefit and take the political and economic relationship between our two countries to new heights.

DS: Singapore and Turkey are important hubs and strategically located at the crossroads of trading activity, albeit in different regions. From this perspective how do think that the location can contribute to the bilateral relations?

Location is an important determinant for a country's growth potential. As a small country without any natural resources, Singapore could not have succeeded if we did not have a good location. In fact, location is one of the very few things that Singapore is blessed with. We are fortunate to be located in the center of an economically growing region in Southeast Asia flanked by two large economies, China to our east and India to our west. Similarly, Turkey has the advantage of being located in a strategic region with easy access to Europe, the Balkans, the Central Asian Republics, the Middle East and Africa. We look at the potential for growing the Turkey-Singapore relations at two levels.

At the first level, Singapore and Turkey could increase our trade and investment with each other, especially with the signing of a comprehensive and new-generation Turkey-Singapore Free Trade Agreement. In 2015, our total bilateral trade was valued at $1.09 billion, a 20.9 percent increase from 2014.

At the second level, Singapore could serve as a hub for Turkish companies that wish to increase their trade and investments in Southeast Asia and the wider Asia-Pacific region. Singapore has been serving this role for many European, American and Japanese companies, and can do likewise for Turkish companies. Similarly, Turkey can serve as a hub for Singaporean companies that would like to invest and trade in the Balkans, Central Asian Republics, Africa and the Middle East. Turkish companies have a good understanding and knowledge of the business practices, markets and economic opportunities in these regions and Singapore businesses can benefit from this and partner with Turkish companies to venture into these areas. Companies find it difficult to expand into distant regions alone. A valued partner who can help provide local insights is crucial to any viable business strategy going forward.

DS: Do you believe the current state of the relationship is fulfilling for both countries? What are the main areas that the two countries need to improve on?

We should never take the current state of relationship as the maximum that we can achieve. Otherwise, complacency would set in. While both Turkey and Singapore have worked hard to achieve the excellent relations that we today enjoy, I believe that there is still much more that we can do if there is political will and economic effort. Turkey's economy has more than doubled in size between 2003 and 2014, from $305 billion to $800 billion. Likewise, Singapore's economy has grown during the same period from $124 billion to $286 billion dollars. Given the phenomenal growth on both sides, and with both countries venturing into new sectors, I am confident that there will be more opportunities for both of us to tap our relative economic strengths for mutual benefit. Singapore has made a significant investment in the port of Mersin in Turkey together with a Turkish company, Akfen Holding. We should now explore other areas such as the aviation sector, especially since Turkey is building the third Istanbul airport and Singapore is building a fifth terminal at our Changi Airport. There is also potential for us to extend our cooperation in the cultural and educational spheres, and increase the flow of tourists between our two countries.

DS: Regarding economic relations, which sectors have more potential for further cooperation?

Ultimately, it is for Turkish and Singaporean businessmen to identify the areas where we can strengthen economic relations. We see an important opportunity for collaboration between Turkey and Singapore in the healthcare industry. Singapore is a medical hub in Asia, and Turkey likewise aspires to become a medical hub for its own region in line with the 2023 Vision. Singapore can share its experiences and capabilities to help Turkey pursue this goal. We are excited about the Healthcare Transformation Program in Turkey, and the investments in healthcare by private and public players, especially the Integrated Healthcare Campuses where our companies can come in as potential investors and service providers. Singapore is interested in solar energy development, and there is a solar energy research institute in Singapore. This could also be an area where both countries could cooperate.

Turkey is a world leader in the construction industry. I foresee that the demand for infrastructure projects in Singapore and the other ASEAN countries will increase significantly in the coming years as the economies of these countries develop, and the demand for transport, housing and other infrastructure grows. Turkish companies could bid for these projects in the ASEAN region.

Furthermore, Turkey, with its 15 UNESCO World Heritage Sites, is one of the largest tourist destinations in the world. Singapore has also been able to successfully increase our tourist arrivals in the last few years. More tourism between Turkey and Singapore will help strengthen our economic cooperation. Singapore Airlines has daily flights between Singapore and Istanbul in the summer months, and five flights a week during the winter months. Turkish Airlines also flies daily to Singapore from Istanbul. Such connections allow for more tourist flows and help create a better understanding of the cultures of both countries.

DS: The Free Trade Agreement (FTA) between Turkey and Singapore expected to come into effect in the upcoming months, was signed in November 2015 during H.E. Prime Minister Lee's visit to Turkey on the occasion of the G20 Leaders Summit. How do you think trade relations will be affected by the FTA?

The FTA is a landmark agreement between Singapore and Turkey. It was completed in record time and is a comprehensive and new generation FTA. After the FTA has been ratified by the Turkish Parliament, it will come into effect in both countries. I believe that the FTA has enormous potential to grow the economic relationship between Singapore and Turkey.

The FTA will reduce barriers to trade and investment between Singapore and Turkey, enhance access to service sectors and procurement markets, as well as promote greater connectivity between businesses and people. Tariffs for Singapore's exports to Turkey on 80 percent of all tariff lines will be eliminated immediately upon entry into force of the FTA, with the coverage rising to more than 95 percent of all tariff lines over a period of 10 years. Turkish importers and consumers, including importers and consumers of electronics, pharmaceuticals, chemicals and processed food products, will benefit from the removal of Turkish tariffs under the Rules of Origin.

DS: How would the possible engagement of Turkey in regional initiatives like Asia Pacific Economic Cooperation (APEC) and Association of Southeast Asian Nations (ASEAN) contribute to relations with Singapore and other regional actors?

I understand that Turkey is considering becoming a Sectoral Dialogue Partner of ASEAN. Singapore welcomes Turkey's interest in having some form of institutionalized relationship with ASEAN. Becoming a Sectoral Dialogue Partner would be a good start as this will strengthen Turkey's relations with ASEAN countries both bilaterally and collectively. There are seven ASEAN embassies in Ankara. We are happy to learn that Turkey has resident embassies in nine ASEAN countries, and will soon open an embassy in the remaining one ASEAN country.

ASEAN is on the rise. Together, the 10 ASEAN member states form the seventh largest economy in the world, with a population of 622 million and a total GDP of $2.6 trillion in 2014. ASEAN's total trade in 2014 was $1 trillion, and intra-ASEAN trade comprised 24 percent of ASEAN's total trade in 2014.Of the world's multi-national companies, 227 have a presence in ASEAN, with a total of $1.068 trillion in revenue. With the establishment of the ASEAN Economic Community (AEC) in December 2015, there will be abundant opportunities for Turkish businesses to invest and trade in this huge ASEAN market of 622 million. ASEAN will be expecting an estimated 100 percent growth in trade volumes if AEC reforms are realized, of which 25 percent will constitute intra-ASEAN trade, and 75 percent will constitute ASEAN's trade with the rest of the world.

DS: Is there anything you would like to add?

Turkey is located in a very strategic part of the world. Turkey has been playing an important role in confronting the complex challenges faced in this region. Turkey's hosting of 2.7 million Syrian refugees reflects the generosity and compassion of the Turkish people. Turkey has taken on this burden more than any other country. Turkey has been a constructive player in addressing the refugee problem, together with the European Union, and in the global fight against terrorism. We hope that with the important contribution of Turkey, the international community will be able to address these challenges effectively and create peace, stability and prosperity in this part of the world. This is an important prerequisite for economic development and growth, which we all need to improve the well-being and standard of living of our peoples.