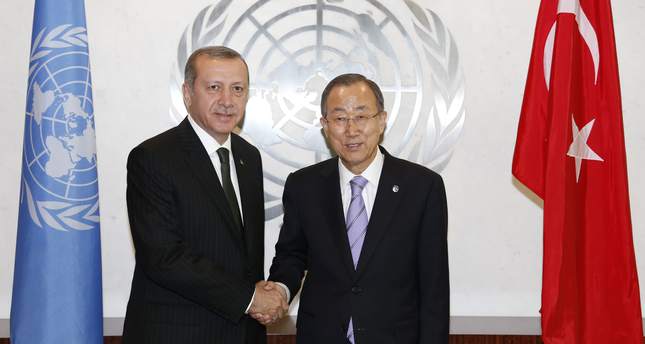 President Recep Tayyip Erdoğan had a phone conversation with UN Secretary-General Ban Ki-moon to discuss the regional developments on Thursday prior to the UN Humanitarian Summit which will be held on May 23-24 in Istanbul.

According to presidential sources, Ban thanked Erdoğan for hosting the summit in Turkey and told him that the organization will convey a strong message to the world about the cooperation on humanitarian matters.

Erdoğan for his part said that Turkey is proud of organizing such events, a first of its kind, and that it will be a great opportunity for world leaders to discuss global and regional developments.

The two leaders also discussed the Syrian crisis and the Cyprus dispute, agreeing that the world needs to build a better cooperation on Syria's political transition and the refugee crisis.

Ban also told Erdoğan that the UN is hopeful that the two sides in Cyprus will find a common solution while assuring the president that he is following the situation in the island closely.

The May 23-24 gathering will be the first global humanitarian summit for the UN since the world body was founded.

The summit will produce a chair summary and a report by the Secretary-General will be submitted to the General Assembly for intergovernmental discussion.