Turkey, US adopt new strategy to drive DAESH from Manbij 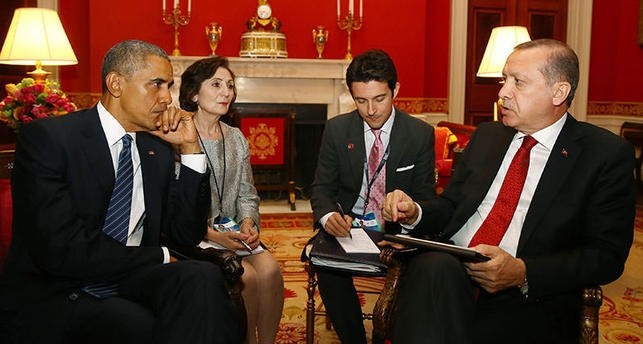 According to diplomatic sources speaking to Daily Sabah, Turkey and the U.S. are ready to implement a joint strategy in Manbij to clear the area of DAESH militants. Erdoğan and Obama also spoke on the phone Wednesday and agreed on the urgency of efforts to defeat the terrorist group

Turkey and the United States are reportedly in efforts to embark on a new strategy to clear DAESH militants from the city of Manbij in northern Syria.

According to diplomatic sources that spoke with Daily Sabah on the condition of anonymity, the two countries have collaborated to create a new strategy in Syria to combat the DAESH terrorist group.

As part of the new strategy, Turkey and the U.S. will work closely with Arab groups on the ground in northern Syria, to support their fight against DAESH. Ankara and Washington are resolute about clearing DAESH from the area around Manbij, which falls under the governorate of Aleppo in northern Syria.

The sources further said that around 2500 Arab fighters will be supported according to the new plan.

On Wednesday, President Recep Tayyip Erdoğan and U.S. President Barack Obama discussed the Manbij strategy in the context of the ongoing crisis in Syria, as well as opportunities for increased bilateral cooperation against terrorist organizations.

During a telephone call Wednesday, the pair "agreed on the urgency of continued efforts to degrade and defeat DAESH, and to disrupt DAESH's capacity to conduct terrorist operations in Turkey, Europe, and beyond," the White House said in a statement.

The statement added: "The two leaders discussed opportunities for deepened cooperation in the fight against all terrorist groups, including the PKK.

In this context, the president emphasized the U.S. commitment to Turkey's security as a NATO ally."

The leaders reportedly discussed the Syrian conflict, with Obama noting the importance of "international cooperation to maintain the cessation of hostilities," and continued progress toward a negotiated political transition.

Speaking to reporters in Abu Dhabi in early May, Foreign Minister Mevlüt Çavuşoğlu said that the United States would deploy high-mobility artillery rocket system (HIMARS) rocket launchers near a stretch of the border in May, and that NATO allies hope to assist moderate Syrian opposition groups on the ground with this system.

"The moderate opposition will advance on the ground," he added.

A senior U.S. military official also confirmed the matter is being discussed, but declined to comment further.

Securing the border with Syria plays a crucial role in Ankara's foreign policy. Faced with a grave threat from across the border, Ankara has repeatedly asserted that any threat from Syria will receive retaliation in kind.

Around two dozen people have been killed in the Turkish border town of Kilis by rocket fire from DAESH terrorists since January, which has prompting the Turkish military to respond with artillery, and Turkish Special Forces carried out an operation within northern Syria earlier this month to take out DAESH teams which were launching these rockets.

Turkey, although a member of the U.S.-led coalition battling DAESH, has received almost none of the support requested from its allies in the fight against the extremist group, and has increasingly indicated Ankara is prepared to take unilateral action. The Turkish Armed Forces (TSK) have stepped up attacks on DAESH in Syria in recent weeks, after rockets fired by the group repeatedly landed in Kilis, in what appeared to be a sustained and deliberate assault. More than a dozen rockets hit the town in just the last week.