No more steps on refugee readmission deal until progress made on visa-free EU travel: President Erdoğan 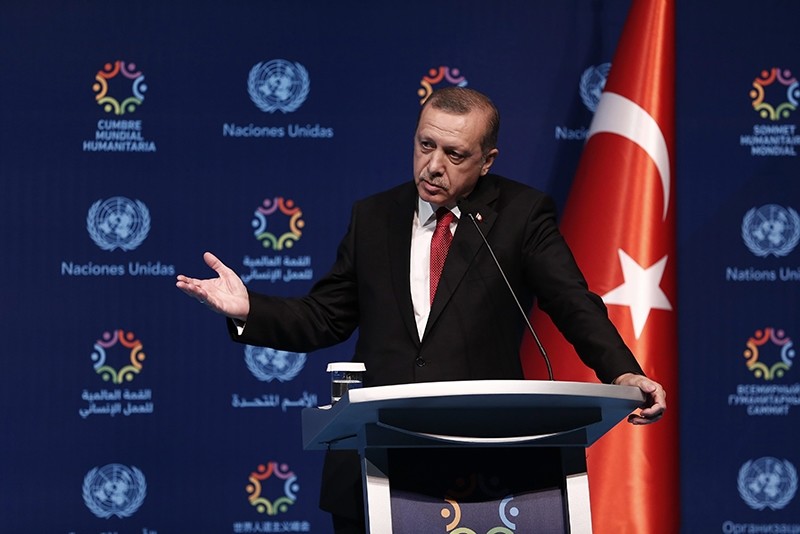 President Recep Tayyip Erdou011fan speaks during a press conference at the end of the World Humanitarian Summit at Dolmabahu00e7e Palace in Istanbul, Turkey, 24 May 2016. (EPA Photo)
by Daily Sabah with Agencies May 24, 2016 12:00 am

Speaking at the U.N. humanitarian summit in Istanbul Tuesday, President Recep Tayyip Erdoğan said that Turkey will not take further steps on implementing the refugee readmission agreement with the European Union until progress is made on visa liberalisation for Turkish citizens.

A readmission process between the EU and Turkey, entered into in October 2014, makes it possible to return undocumented, illegal refugees who enter Europe via Turkey and vice versa.

Full implementation of the readmission agreement is also required in order to implement a visa-liberation process for Turkey.

Talks over visa-free travel for nearly 80 million Turks soured when the EU requested that Turkey complete the five remaining benchmarks, out of an initial 72, including one on terrorism.

Turkey, which is currently fighting terrorist groups such as Daesh and the PKK, has refused to alter its terrorism laws. "[The EU] should not keep trying to impose criteria on us. This is Turkey," Erdoğan said, adding that certain Latin American countries, whose citizens are exempt from visa requirements to travel to the Schengen are, did not have to fulfill the same criteria as Turkey.

Erdoğan asked why Turkey, which is an EU candidate country and part of the bloc's customs union, would have to fulfill 72 requirements.

Visa freedom is also part of an EU-Turkey deal which provides a 6 billion euro ($6.8 billion) aid package to meet the needs of millions of refugees in Turkey and speeding up the country's accession talks.

But Erdoğan reiterated that Turkey, which has already spent billions of dollars on Syrian refugees since the beginning of the crisis, does not need the EU's money.

"At the end of the day [the aid] doesn't come to Turkey, it is provided to refugees in camps mostly to improve their living conditions --Turkey is not asking for favors," Erdoğan said.

"What we want is honesty, Turkey is supposed to fulfill criteria, what criteria are these, what do you mean by criteria?" he said.

Erdoğan said that the funds promised by the EU under the terms of the refugee deal had not yet been released.

"It is disappointing that [some] world leaders could not be here especially those from G7 countries, except Angela Merkel of Germany," Ban said at a joint press conference with the summit's host President Erdoğan.

"The absence of these leaders does not provide [an] excuse for inaction. They have a unique responsibility to promote peace and stability," Ban said, adding that he proposed the summit four years ago out of "concern for rising humanitarian needs and declining political will".

The G7 countries, also called the Group of 7, includes the world's largest industrial nations such as Canada, France, Germany, the United Kingdom, Italy, Japan, and the United States.

"We can only reach rightful and lasting solutions through international cooperation," Erdoğan president said, adding that lending a helping hand to those victimized was a necessity of being human.

During the summit, attended by 125 of the UN's 193 member states, at least 50 heads of government are announcing commitments to reduce humanitarian disasters.

These include: preventing and ending conflict; respecting the rules of war; addressing forced displacement; addressing gender inequality; responding to climate change; ending the need for aid; and investing in humanity.

Turkey ranked third in the list of countries with the most international humanitarian work in 2012 and 2013, the Turkish Cooperation and Coordination Agency, TIKA, says in its Turkish Development Assistance 2013 report-the latest such figures from the agency.

Turkey has spent nearly $10 billion on caring for them since the start of the Syrian crisis.