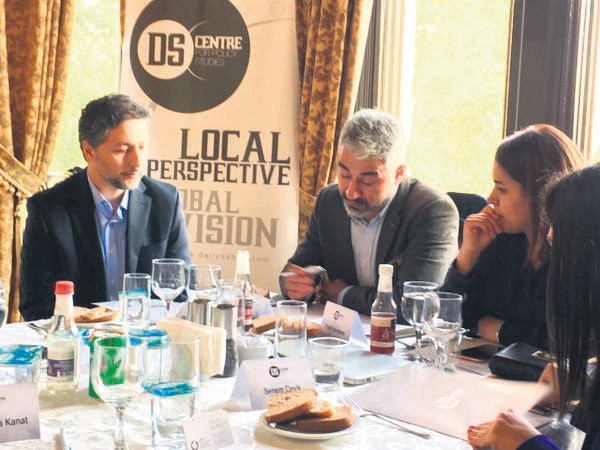 by Fatih Şemsettin Işık May 25, 2016 12:00 am
The Daily Sabah Centre for Policy Studies has organized its monthly roundtable discussion on "The Future of Turkish-U.S. Relations at a Time of Regional Crises," on Monday in Istanbul.

Along with bilateral relations between Ankara and Washington, the speakers discussed and analyzed Turkish-Israeli relations and the relationship between Turkey and Iran. Syrian Kurds and their connection with the PKK was also examined.

Several Turkish and foreign journalists and academics attended the program moderated by the the managing editor of the Turkish Radio and Television Corporation (TRT), Resul Serdar Ataş.

The first speaker was B. Senem Çevik, a lecturer at the University of California Irvine (UCI) Program in International Studies, who also teaches disaster diplomacy. She argued that humanitarian crises such as those in Kosovo and Bosnia in the 1990s and, more recently, the Syrian refugee crisis, can bring people together by building bridges between communities. Dialogue within and between civil societies can create opportunities for Turkey and the U.S. to strengthen their relations with one another. She went on to say that rising extremist rhetoric and Islamophobia that is used by the likes of Donald Trump has made this issue of dialogue between countries more critical.

Speaking on Turkish-Iranian relations, which are expected to gain a new dimension with the nuclear deal between Tehran and world powers, Kadir Üstün, who is the executive director of Ankara's Political, Economic and Social Research Foundation (SETA) Washington branch, touched on the two countries' overlapping interests in Syria. In his discussion on the efforts of the PKK Syrian affiliate Democratic Union Party (PYD) to create an independent state in northern Syria, he said that it is something that both Iran and Turkey are vehemently against because it risks compromising Syria's territorial integrity. "Although Turkey is anti-[Bashar] Assad and Iran is one of the main backers of the Assad regime, Syria devolving into chaos is not in either country's best interest," he said.

Kılıç Buğra Kanat, who is an assistant professor of political Science at Penn State University Erie and a research fellow at the SETA Foundation in Washington, said that the job of the new administration in the U.S. should be to clarify its goals and objectives and communicate those objectives to its allies. The U.S. must institutionalize its partnerships with its allies around the world. "The new U.S. administration will hopefully come up with a strategy of selective engagement, something different from [U.S. President Barack] Obama's strategic patience," he said. He added that the U.S. and Turkey need to create a multilayered relationship, one that depends on the diversification of communication channels between the foreign policy bureaucracies of both countries.

The Daily Sabah Centre for Policy Studies is the think tank extension of Daily Sabah and has been organizing conferences and events worldwide since it was established in March 2015. It has so far collaborated with various prominent think tanks and universities. Last April it held its first ever journalism academy in Turkey with the participation of foreign journalists from around the world. It has also held conferences jointly with the European Council on Foreign Relations (ECFR) in London, the Carnegie Moscow Center and the Royal United Services Institute (RUSI).
RELATED TOPICS