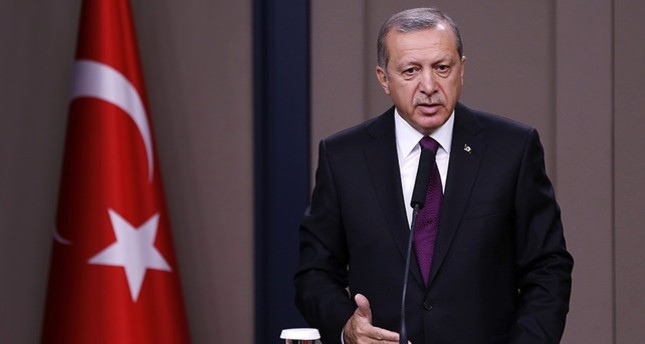 President Erdoğan said he had no idea what Russia expected Turkey to do as a first step to mend ties, adding that he is concerned over how close bilateral relations could be sacrificed because of a Russian pilot's mistake

President Recep Tayyip Erdoğan, speaking Tuesday before flying to Africa to visit Uganda and Kenya, remarked on official Russian statements calling on Turkey to take the first step to mend bilateral ties, saying that such an expectation is hard to understand: "I am having difficulty understanding what kind of a first step Russia is expecting from us."

Speaking to reporters at İzmir's Adnan Menderes Airport, he also said he was concerned over Russia's decision to discard once-close ties with Turkey due to a pilot's error. A Russian pilot on a bombing mission in Syria last November veered into Turkish airspace and refused to withdraw despite repeated warnings. Turkish fighter jets fired on and hit it, which caused the Russian plane to crash into Syria, killing one of the two pilots.

The crash caused a serious deterioration in ties and led to Moscow's decision to impose various economic sanctions on Turkey. Last Friday, President Vladimir Putin of Russia, speaking while in Greece, said he was ready to consider restoring relations with Ankara, but that he would require Turkey to take the first step. Ankara has made several attempts to resolve the crisis with Russia, but has not received a positive response from the Kremlin. Russian officials have also rejected Turkey's proposal to establish a working group to resolve the breakdown in ties.

Furthermore, the Foreign Ministry said in a press release that the airstrikes hit a hospital and a mosque in the city, killing at least 60 civilians and injuring about 200. The ministry also called on the international community to act swiftly against what it called Russia and the Syrian regime's "indefensible" crimes.

"It is obvious that Russia, which says that it defends a political solution in Syria and a cease-fire agreement, has carelessly trampled on these principles," the statement said.

The Syrian Observatory for Human Rights said on Tuesday that Russian warplanes hit Idlib overnight, killing 23 civilians in the heaviest strikes in months.

Dozens of civilians were also wounded in raids on Idlib, the monitoring group said.

"The airstrikes are the most intensive on Idlib since the beginning of the truce," observatory chief Rami Abdel Rahman reportedly said.

"Even though Idlib is not covered by the truce, it had been relatively calm with only intermittent raids," he added.

The observatory said five children were among those killed in the strikes, which hit several residential areas and near a hospital and public garden.

Footage posted on social media by the civil defense group known as the White Helmets showed rescuers holding the limp, dust-covered body of a small boy who was among the dead.

Russia, however, has denied its planes conducted the airstrikes.

"Russian planes did not carry out any combat missions, to say nothing of any airstrikes, in the province of Idlib," Igor Konashenkov, a Russian Defense Ministry spokesman, said in a statement. Russia launched a military intervention in Syria in September 2015, supposedly after a formal request from Assad for military help. Russia decided to reduce its forces in the war-torn country in March. According to a tally compiled by Turkey's state-run Anadolu Agency (AA), more than 361,000 people have been killed in Syria since the conflict erupted in 2011.