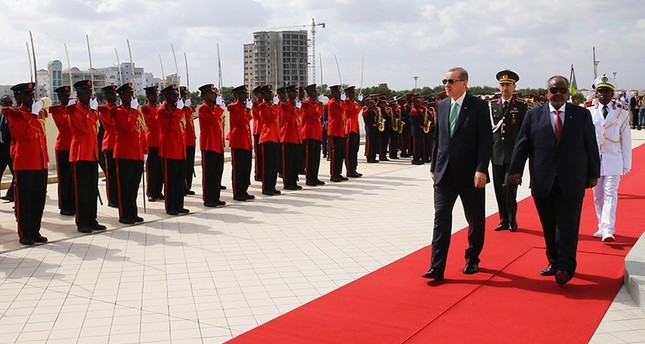 Dozens of Turkish businesspeople will also be in attendance in efforts to boost ties with African nations in sectors including energy, agriculture, mining and tourism. Before his departure, Erdoğan held a press conference at İzmir Adnan Menderes Airport. His message was clear: "We will knock on every door to reach Turkey's 2023 goals." The goals that have been set for 2023, the centennial of the Republic of Turkey, includes raising export volume to $500 billion and joining the league of the 10 biggest economies in the world. Erdoğan's first stop was Uganda, East Africa's landlocked country, where he will be attending a business forum hosted today by the Foreign Economic Relations Board (DEİK). Erdoğan's Ugandan counterpart, Yoweri Museveni, who has been in power since 1986, will also be attending the forum. The two leaders will encourage their businesspeople to increase partnerships, pushing the currently low trade volume to higher levels. The total annual trade volume of the two countries was $37.9 million in 2014 and $29.2 million in 2015.

On the second part of his trip, Erdoğan will hold official talks with Kenyan authorities, and another business forum organized by DEİK will be held in Kenya. Kenyan President Uhuru Kenyatta is expected to attend.

Turkey's official policy of "opening to Africa" has blossomed since then-Prime Minister Erdoğan initiated the partnership in 2005. Bilateral trade between Turkey and African countries has increased significantly over the past 11 years. Bilateral trade volume rose to $156 million in 2012 between Turkey and Kenya, an increase of 1,442 percent compared to 2002, according to Economy Ministry data.

The aim of President Recep Tayyip Erdoğan's visits to Uganda and Kenya, which began today, is to boost bilateral trade and mutual investments in the countries while reducing the effect of the Gülen Movement in the region. This is taking place within the framework of Turkey's search for alternatives in external trade in response to the ongoing instability in Middle Eastern countries and Turkey's neighbors.

According to officials who spoke to Reuters, Erdoğan will discuss the closure of Gülenist schools actively operating in African countries during his visit to Africa, voicing Ankara's concerns regarding the movement's activities in the region as well.

In a statement following a meeting with the National Security Council last week, Erdoğan said that Turkey is recommending that the governments of these African nations define the Gülen Movement as the "Gülenist terror organization," submitting the request to the Kenyan and Ugandan governments.

A senior official who spoke with Reuters said the Gülen Movement has become "very powerful in Africa" in terms of its educational institutions and nongovernmental organizations (NGOs). He also pointed out that Turkey's specific concerns will be addressed during the visit to Kenya and Uganda, namely with regard to the movement's presence in Turkey, how the parallel government structure operates, the image they portray to the public, their questionable activities abroad and the extent of damage caused in other countries. Stating that the movement has grown rapidly in terms of its international presence, largely by exploiting Turkey's powerful reputation as a nation, the senior official stated that Turkey does not support members of the movement and identified the movement as a terrorist organization that threatens democracy in Turkey and other countries as well.

A cooperation policy with Africa has opened the door for Turkey to develop ties with Uganda, an African country with great economic potential, and is the reason for Erdoğan's four-day trip to the continent. According to a statement by the Foreign Ministry, the Embassy of Turkey in Kampala, Uganda's capital, opened in 2010, while the Embassy of Uganda in Ankara opened in 2011.

Turkish citizens residing in Uganda conduct business in the country ranging from importing dry food materials, ready-made clothing and textiles to construction. Turkish businesspeople have invested more than $150 million in Uganda, and Uganda is an emerging market for Turkish contractors.

With significant natural resources including ample fertile land, steady rainfall and mineral deposits, Uganda is said to be capable of feeding all of Africa if it were commercially farmed. Twenty-three percent of Uganda's annual income comes from agriculture, while 26.9 percent and 50 percent of total income comes from industry and service-related activities, respectively.

The Ugandan economy has great potential and is poised for rapid economic growth and development. Even though as a sub-Saharan country Uganda is typically classified as a low-income country, World Bank economic growth data indicates that Uganda grew 5 percent in 2015 with forecasters indicating that Uganda will grow 5 percent this year and 5.8 percent in 2017 and 2018. These numbers are above the growth forecasts for the other sub-Saharan countries, which are 4.2 percent for 2016 and 4.7 percent for 2017 and 2018.

While 20 percent of Uganda's total imports consist of petroleum-based lubricating oils followed by medical products and motor vehicles, it mainly exports coffee, fish and sea products. Despite the fact that Turkey is not a major trade partner of Uganda, commercial and economic relations between Turkey and Uganda have gained momentum within the last decade. Bilateral trade volume rose to $38 million in 2014 with an increase compared to 2013 when it was $1.7 million. The exports to Uganda amounted to 26.4 million in 2014 while imports totaled $11.5 million that year. In 2015, Turkey sold cereals, various agricultural machinery and electric parts (including non-electrical counterparts) to Uganda, importing mostly tobacco, leather and cotton from the African country.

Kenya, President Recep Tayyip Erdoğan's second stop on his African tour, has taken giant steps in recent years toward consolidating and developing diplomatic and economic relations. The formal two-day visit paid by former President Abdullah Gül in February 2009, which was the first sub-Saharan country he visited, accelerated the development of relations between the two countries. Also, after Erdoğan's first visit in 2009 when he was prime minister, Turkish Airlines opened a new route to Africa and started flying to Nairobi, Kenya's capital and largest city. Also, on Dec. 5, 2012, Turkish Airlines started operating flights to Mombasa, Kenya's second-largest city, further widening its routes to Africa.

Kenyan President Uhuru Kenyatta paid an official two-day visit to Turkey in April 2014. This visit was meaningful for the relations between Turkey and Kenya because it was the Kenyatta's first official visit to the European continent, which led to the deepening of bilateral cooperation.

Kenya is the biggest and most advanced economy in Eastern and Central Africa, and has an affluent urban minority. The important agricultural sector employs 75 percent of the workforce in Kenya. It is usually classified as a frontier market, however, it is not one of the least developed countries.

Having grown 6.16 percent in 2015 according to the International Monetary Fund (IMF), Kenya's economy has seen much expansion in recent years, bolstered by its strong performance in tourism, higher education and telecommunications. According to data released by the World Bank, Kenya's economy performed considerably better in the last decade than the average growth rate experienced by the other sub-Saharan countries. Additionally, its foreign debt was greatly reduced. Taking the last decade into consideration, the growth rate of Kenya fluctuates with booms and busts - to some extent - while the growth rate has stabilized since 2012, fluctuating slightly above 5 percent. The World Bank forecasts that Kenya will grow 5.7 percent in 2016 and 6.1 percent in 2017 and 2018, which demonstrates the great potential of Kenya within its region.

Eastern and Central Africa's biggest economy has posted tremendous growth in the service sector, boosted by rapid expansion in telecommunications and financial activity over the last decade. While a small portion of the population relies on food aid, industry and manufacturing is the smallest sector, accounting for 16 percent of gross domestic product (GDP), the services, industrial and manufacturing sectors only employ 25 percent of the labor force but contribute 75 percent of GDP, which also demonstrates the inefficiency of the agricultural sector in a sense.

Kenya's volume of foreign trade nearly doubled in the last decade, totaling $6.11 billion in 2014. The country mainly exports tea, petroleum-based lubricating oils and coffee, while it imports mainly motor vehicles. Although Turkey is not among Kenya's major trade partners, trade volume between the two countries has tripled over the last 10 years from $52 billion in 2005 to more than $140 billion in 2015.

Turkey's exports to Kenya in 2015 totaled more than $130 million. The top five export categories (2-digit SITC) for 2015 were hygienic towers and other similar products, some motor vehicle parts and tractors. It imported goods worth more than $10 million, ranging from coffee to crude animal and vegetable materials.
Last Update: Jun 01, 2016 10:49 am
RELATED TOPICS