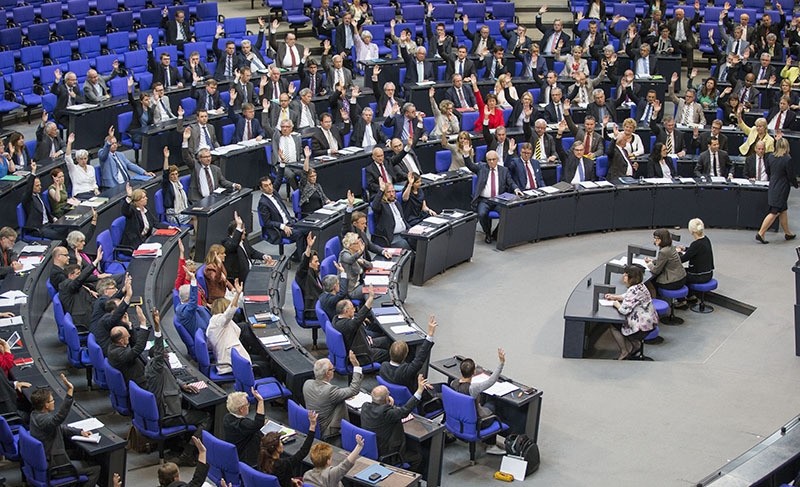 Ankara on Thursday strongly criticized the resolution adopted by the Parliament of the Federal Republic of Germany regarding the 1915 events, and noted that the resolution will not contribute to reconciliation between the two states, while urging Germany, which has an extensive genocide record from Namibia to the Holocaust, to take a fair and objective stance in line with European law.

A statement released by the Ministry of Foreign Affairs noted that the resolution is a 'disgrace to the reputation of the Parliament of the Federal Republic of Germany.'

''This resolution is an example of ignorance and disrespect for the law which politicizes history and prevents free discussion on historical issues while trying to impose the self-created Armenian narrative as an indisputable fact,'' the statement said, adding that Turkey wishes to remind those who signed it of the following:"

''Achieving reconciliation on the controversial events of 1915 is possible only through dialogue, empathy and a fair point of view.

With this understanding, Turkey tries to honor the memory of the Ottoman Armenians, shares their sufferings, preserves Armenian cultural heritage and takes significant steps for paving the way for reconciliation between the two neighboring nations. In this respect, there is nothing that Turkey will learn from the Parliament of the Federal Republic of Germany.

If the Parliament of the Federal Republic of Germany wishes to learn what exactly happened during the dissolution of the Ottoman Empire, it may contribute to the establishment of the Joint History Commission which will function independently on a scientific basis and open to everyone, as has been persistently proposed by Turkey since 2005.

In Germany, where freedoms can be exercised easily in many fields, there is a univocal and suppressive environment regarding the events of 1915. Instead of comprehending and explaining what had happened in 1915, numerous books, documentaries and films have been fabricated on the basis of purposeful works over so many years, to achieve the duty of forming a one-sided opinion in the German public to impose Armenian narrative on the said events.

Turcophobia and Islamophobia reaching to the level of racism, current developments in domestic politics and foreign policy, some arrogant and opportunist politicians, and the deep trauma created by Germany's record of past crimes against humanity and genocide extending from Namibia to the Holocaust may possibly be mentioned among the reasons lying behind this policy.

Even worse, this initiative of Germany constitutes an attempt to assimilate Turks and Germans of Turkish origin, who have contributed significantly to the political, economic and socio-cultural life of Germany and to alienate them from their own history and self-identity.

It is also for this reason that the initiatives for dictating the Armenian narrative to young generations by means of public education cause concern. Turkish children in Germany are expected to defend a narrative which they do not believe and know that it is untrue, so as to succeed in history classes. Such a notion of education, is not only incompatible with the ideals of a democratic country and will not help harmonization efforts either.

It goes without saying that there will be resistance against this dictum by use of all kinds of means including legal remedies.

The Turkish ministry also called on Germany to not politicize a historical event, which occurred 101 years ago, and take a fair and objective stance, which was a requirement of European law to which it is a party.

''In this sense we would like to remind once again the legally binding observations of the European Court of Human Rights to the effect that, the Armenian narrative do not reflect the absolute truth and can be discussed freely; the opinions questioning the Armenian narrative are under the absolute protection of the freedom of speech; and no parallels can be drawn between the events of 1915 and the Holocaust.''

It is clear that the Parliament of the Federal Republic of Germany interprets history arbitrarily, without taking the law into account.

It is also clear that this prejudiced and illogical policy is in need of serious self-criticism.

The German public opinion should respect, as a requisite of democracy and human rights, the opinions, memories and sincere efforts of the Turks for the purpose of reconciliation,

We expect that Germany, as our ally and as a country with which we cooperate closely for the future of Europe, will take into consideration our opinions and sensitivities to which we attach vital importance, for the sake of the future of both our bilateral relations as well as the Turkey-Europe relations.

Under these circumstances, H.E. Hüseyin Avni Karslıoğlu, Ambassador of the Republic of Turkey to the Federal Republic of Germany has been recalled for consultations.''

The lower house of Germany's Federal Parliament approved a controversial motion labeling the 1915 events as 'genocide' on Thursday, despite warnings from Turkey that the decision would substantially damage bilateral relations between the two countries.

Prime Minister Binali Yıldırım said earlier this week Turkey would not cancel a deal with the European Union on curbing the flow of migrants to Europe over the motion, but told party officials in Ankara earlier Thursday that the vote was a "true test of friendship."