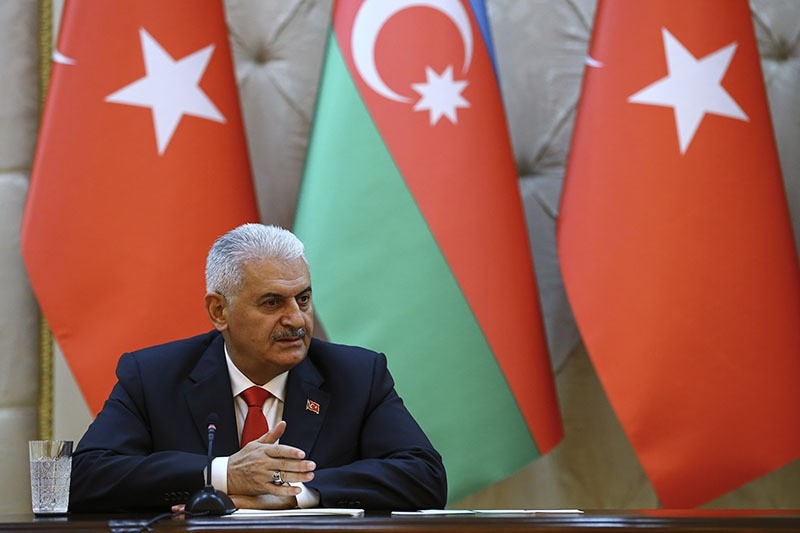 Prime Minister Binali Yıldırım said Friday that Germany had signed a "historic falsehood" after its parliament passed a motion to recognize the Armenian 'genocide' of 1915.

Speaking at a news conference after meeting Azerbaijan's President Ilham Aliyev in Baku, Yıldırım repeated earlier statements that the motion was "null and void" for Turkey.

Stating that "history should be left to historians," Yıldırım added: "It is a misfortune that the German parliament signed such an issue, in which even historians are in dispute… even international courts have taken different decisions."

On Thursday, the German parliament passed a non-binding resolution accusing the Ottoman government of conducting "systematic genocide" against Armenians and other minorities in 1915.

Yıldırım said German-Turkish relations had been seriously damaged and that the move had disappointed nearly 3.5 million Turkish citizens living in Germany.

"Turkey expects the German government and politicians to take measures in a short time to remove this destruction with a more healthy assessment," said the prime minister.

The events of 1915 saw some of the Ottoman Empire's Armenian population side with invading Russian forces, resulting in numerous deaths in the subsequent fighting and relocations.

Turkey accepts that many died on both sides but says this did not amount to genocide and has repeatedly called for the creation of an international commission to resolve the issue.

The prime minister also accused the international community of maintaining a double standard over Armenian massacres on Azerbaijani soil.

"Why do those countries not highlight the Khojaly massacre, which was a black night in history? This is also a genocide; this is also a massacre... Therefore, we see a double standard has been continuing," Yıldırım said.

The massacre on Feb. 25-26, 1992, is regarded as one of the bloodiest and most controversial incidents of the war between Armenia and Azerbaijan for control of the occupied Karabakh region.

Armenian forces took over the town of Khojaly in Karabakh on Feb. 26 after battering it with heavy artillery and tanks.

The two-hour offensive killed 613 Azeri citizens, including 116 women and 63 children and critically injured 487 others, according to Azerbaijani figures.

Yıldırım called on the international community to abandon its double standard in regional and global issues: "We are inviting countries under the United Nations roof to take more responsibility," he added.