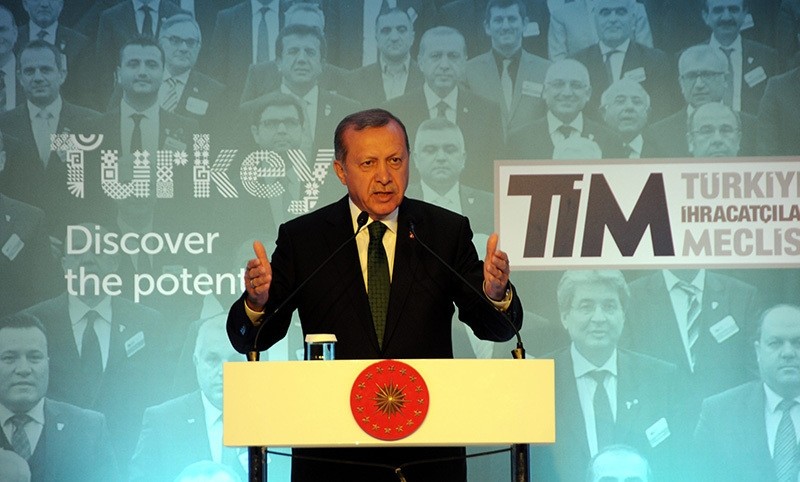 The Armenian issue is being exploited to blackmail Turkey around the world, President Recep Tayyip Erdoğan said on Saturday, underscoring that Turkey will never accept accusations regarding the 1915 events constituting 'genocide'.

"I know in my heart that the main point is not Armenians. They are just being manipulated. The Armenian issue is just blackmail against Turkey around the world," Erdoğan said.

"I want to let the world know: like it or not, we will never accept the 'genocide' accusation," he added.

He invited German politicians to jointly open the archives to settle the question about Armenian killings during 1915. "If available, you can also open your archives. Come and let us make a decision."

But, he said, the German politicians would not dare do such a thing "because when you attempt something like this, you know you are going to be disgraced."

According to the president, Turkey has nothing to be ashamed of in its history.

"I emphasize one more time. We have nothing in our past to be ashamed of, but those countries that often accuse Turkey of 'Armenian genocide' have the blood of millions of innocent victims."

Erdoğan said Germany should be the last country to speak about the so called 'Armenian genocide'. "They [Germans] should firstly define the meaning of Holocaust again. They should review the Namibia Holocaust," he said.

The Namibia Holocaust is considered one of the first genocides of the last century, which was carried out against the Heroro and Nama peoples in southwest Africa by the then German empire.

He called on Germany and Europe to be fair in resolving all issues with Turkey.

"Either we will fairly resolve the issues on our agenda or Turkey will cease to be a barrier in the way of Europe's challenges, and we will leave you on your own with your ordeals," he said.

"What we want is that Turkey be fairly treated, to not have double standards, for rules which are valid for everyone be valid for us as well," Erdoğan said.

He clarified that Turkey did not have any enmity with Europe.

"In fact, we do not have any problem with EU and European countries. It is not possible to feel an enmity for a geography where about our five million brothers of Turkish origins or citizens live.

"Just as we are a part of Europe geographically, we also see Europe as a part of us," Erdoğan said.

Later, in his address at a different event in Istanbul's Medipol University, the president also strongly criticized German Chancellor Angela Merkel over what he called her "inaction" following the German parliament's resolution.

He said he spoke with Merkel ahead of the vote, who told him that she would do her best. "Is the best thing you could do not participating in the vote at the parliament? If you were fair, you would have attended it and been the lady who said [voted] no…then I would have applauded you," he said.

He added that Merkel's own party group in the German parliament had not been fair or sincere.

Merkel, Vice Chancellor Sigmar Gabriel and senior ministers did not attend Thursday's vote. Only one lawmaker from German Chancellor Angela Merkel's Christian Democratic bloc, Bettina Kudla, had voted against the motion, while another lawmaker from Merkel's party, Oliver Wittke, abstained.

Ankara strongly criticized the resolution and noted that it will not contribute to reconciliation between the two states, while urging Germany, which has an extensive record of genocide, from Namibia to the Holocaust, to take a fair and objective stance in line with European law.

Turkey denies the alleged Armenian "genocide," but acknowledges that there were casualties on both sides during the events which took place during World War I.