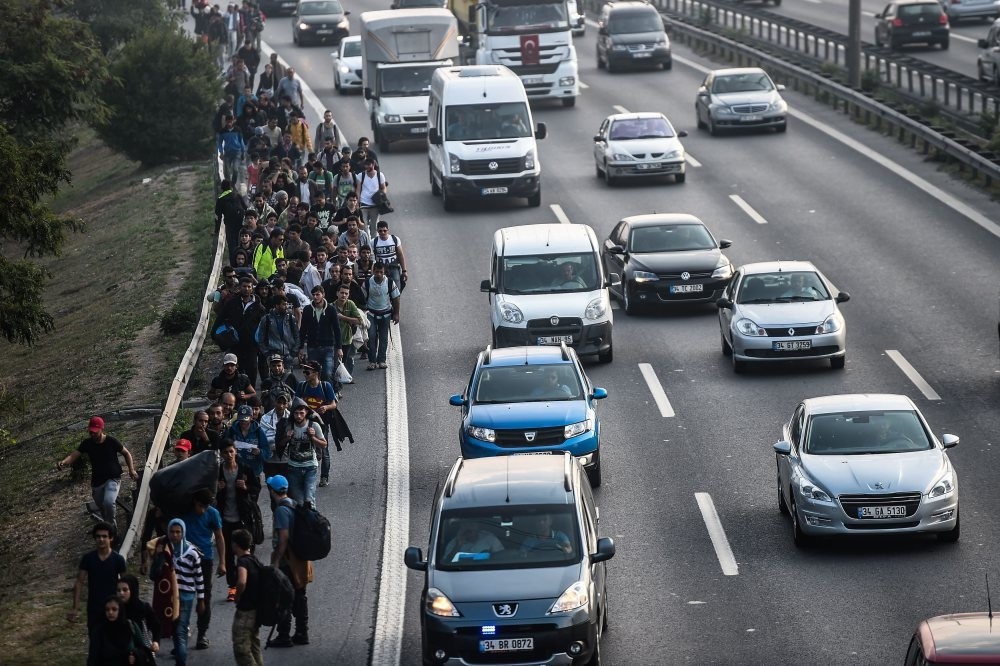 by Yunus Paksoy Jun 04, 2016 12:00 am
Having soured relations with Ankara following the adoption of the Armenian resolution in German parliament (Bundestag), hundreds of thousands of refugees in Istanbul are more hopeful about going to their dreamland, Germany, if Turkey opens its borders. The Bundestag on Thursday adopted a controversial resolution that defines the 1915 events in the Ottoman Empire as genocide. In spite of Ankara's warnings to Berlin about the possibility of deteriorating ties due to the symbolic resolution, German Chancellor Angela Merkel's Christian Democrat Union (CDU) and other parties in the Bundestag voted in favor of it. Both President Recep Tayyip Erdoğan and Prime Minister Binali Yıldırım conveyed their frustration with Germany, which is a very close ally, both politically and economically.

Both President Recep Tayyip Erdoğan and Prime Minister Binali Yıldırım conveyed their frustration with Germany, which is a very close ally both politically and economically. "This is a decision that will seriously affect our relations," Erdoğan said.

Yıldırım made his dissatisfaction known as well: "There is no event in our past that would cause us to bow down our heads in embarrassment."

With the possibility of Turkey opening its borders for refugees willing to go to Germany looming, many refugees taking shelter in the country are more hopeful about the perilous journey.

In a recent interview with Daily Sabah, 39-year-old Iraqi Ammar, a refugee who fled DAESH in Iraq, said he is currently unemployed and waiting for a chance to leave for Europe. "I love Turkey. The culture and hospitality here are unique for us," Ammar said. Even though Ammar is scared of Islamaphobia in Europe, he dreams of a better life in Germany. "Open the borders," Ammar said in comments directed to Erdoğan.

Aaya, a 15-year-old girl from Damascus, is also waiting for a decision from Germany that would reunite her with her family. "The decision takes too much time. If there is an opportunity in the near future for us to go to Europe, I swear to God I will go," she said.

Playing games with Aaya on the street, Adila, 13, from Aleppo joined the conversation. "My family will decide if we will go or not," she said, adding that an opportunity could lead her father to make some decisions. "I would go to Germany," she said.

Firas, a 31-year-old refugee from Aleppo, said he has been in Istanbul for seven months while his wife is in Europe waiting for a family reunion. "Many of my relatives are still in Aleppo. The situation there is horrible," he said.

Aware of the growing prospect of Turkey opening its borders, refugees are already looking for new routes to Europe this summer. "Belgium, Belgium," Aamina shouted, dreaming of a family reunion in Brussels.

"I want to take my mother, who is currently in Lebanon, to Belgium where our other relatives are," she said.

Worried about the future of her six children, Aamina is looking for new routes to Belgium.

Mazin, a 32-year-old Syrian, works at a restaurant to earn a living. "My brothers are in Germany. I work here only because I need to earn money to be able to buy food, clothes and other needs," he said.

Counting down the days before he leaves for Europe, Fazin said he did not set out on the perilous journey because it was winter. "Now that it is summertime and there is a possibility, I will definitely go to Europe," he said.

Contending that nearly all of his friends and acquaintances are looking forward to the day Turkey opens its borders to Europe, Fazin prays that his dream comes true.

Basri, a 12-year-old from Damascus, said he lost many of his family members in airstrikes.

Having learned that an opportunity to go to Europe could emerge following the rift between Turkey and Germany, he said he hopes his father will decide to go: "If Turkey decides to open its borders, I guess we will go to Europe."

"We are working very hard to earn a living and keep ourselves fed. My father will decide whether we stay or not, but I still dream of Germany," Basri added.
Last Update: Jun 04, 2016 1:27 pm
RELATED TOPICS