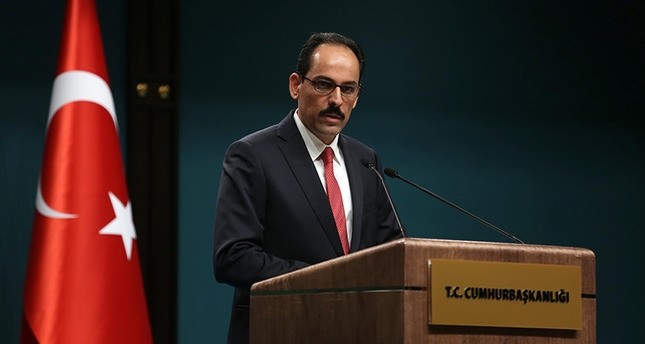 Turkish Presidency spokesman İbrahim Kalın criticized the German parliament on Monday in an op-ed piece penned for the German newspaper Frankfurter Allgemeine Zeitung. Kalın wrote, "Instead of accusing Turkey with false claims, Germany should put pressure on Armenia to proceed with efforts to resolve the conflict."

Kalın, who also writes a regular column for Daily Sabah, wrote, "Rewarding Armenia's lack of interest in a meaningful progress, Germany has made the Caucasus a more dangerous place. Under the pretext of promoting peace between Turks and Armenians, the German parliament ignored Yerevan's uncompromising stance and unjustly targeted Turkey."

Kalın referred to the controversial resolution approved by the German parliament last week that described the ill-fated 1915 relocation of Armenians in the Ottoman Empire as "genocide." Kalın dismissed the term, saying the accusation directed against Turkey had no legal basis or supporting evidence. "This politically motivated decision is unlawful, misguided and ultimately harmful to the prospect of reconciliation between Turks and Armenians."

Kalın stressed that President Recep Tayyip Erdoğan was the first Turkish politician to acknowledge the pain suffered by Ottoman Armenians in World War I, and has put forth various initiatives so far to promote dialogue between Turks and Armenians. He added that Turkey's approaches to normalizing relations, in addition to proposals for the creation of a joint commission of historians as well as shared examination of the Ottoman archives, have been rejected by Armenian authorities.

The non-binding resolution approved last Thursday by the German parliament, known as the Bundestag, accused the Ottoman government of 1915 of carrying out "systematic genocide" against Armenians, as well as other Christian minorities.

Turkey denies the allegations of genocide, but acknowledges that during the events, there were casualties on both sides.

According to Turkey's viewpoint, the deaths of Armenians in eastern Anatolia in 1915 occurred after some Armenian separatist factions sided with invading Russians and revolted against Ottoman forces. A subsequent relocation of Armenians resulted in numerous casualties.