President Erdoğan to attend Muhammad Ali funeral in US 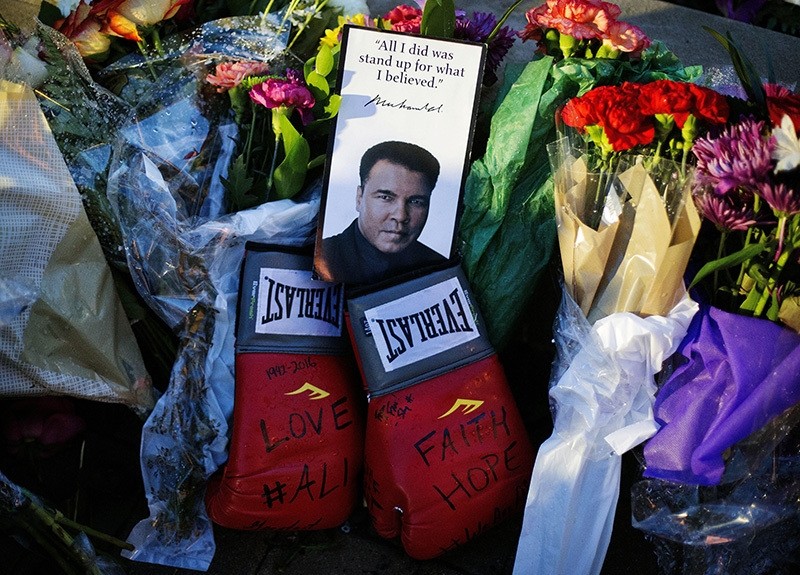 Boxing gloves and a message sit among flowers at a makeshift memorial to Muhammad Ali at the Muhammad Ali Center, Saturday, June 4, 2016, in Louisville, Ky. (AP Photo)
by Daily Sabah with Agencies Jun 06, 2016 12:00 am

President Recep Tayyip Erdoğan will attend the public memorial service for boxing legend Muhammad Ali on Friday in Louisville, a spokesman for Ali's family said on Monday. Spokesman Bob Gunnell made the announcement as he unveiled details of the ceremonies to take place in Ali's home town in the southern U.S. state of Kentucky, where his coffin will be paraded through the streets before the public funeral.

The iconic former boxing champion died on Saturday at the age of 74 in Phoenix, Arizona.

In Turkey, a presidential source told AFP: "We confirm that the president will travel to Louisville, Kentucky to attend boxing legend Muhammad Ali's funeral. He leaves Wednesday evening."

Erdoğan is also set to speak at Ali's funeral Friday according to Gunnell. California imam and scholar Zaid Shakir will preside over the service at the KFC Yum! Center in Louisville. Speaking at the funeral will be representatives of multiple faiths, including Islam, Judaism, Christianity, Buddhism, Mormonism and Catholicism. They will be followed by Ali's wife, Lonnie Ali, daughter Maryum Ali, actor Billy Crystal, sportscaster Bryant Gumbel, President Erdoğan and King Abdullah II of Jordan. Former U.S. President Bill Clinton will deliver the eulogy. The Dalai Lama was invited, but sent his regrets that he will be unable to attend.

The death of Muhammad Ali was received with widespread grief across Turkey. Erdoğan said in a tweet: "May Allah have mercy on Muhammad Ali, whose courage, conviction and determination inspired all of humanity."

"Ali was an extraordinary athlete and a remarkable man of good deeds who conquered the hearts of millions," Erdoğan also tweeted. "This boxing legend's life-long struggle against racism and discrimination will never be forgotten," the president added.

President Recep Tayyip Erdoğan's office has confirmed that the Turkish leader will attend the funeral of Muhammad Ali this week in the United States.

Muhammad Ali won the heavyweight title three times and was known for his unorthodox fighting style, merging power and agility.

Outside of the ring, he was famous throughout the world for his charismatic personality, as well as his social and political activism.