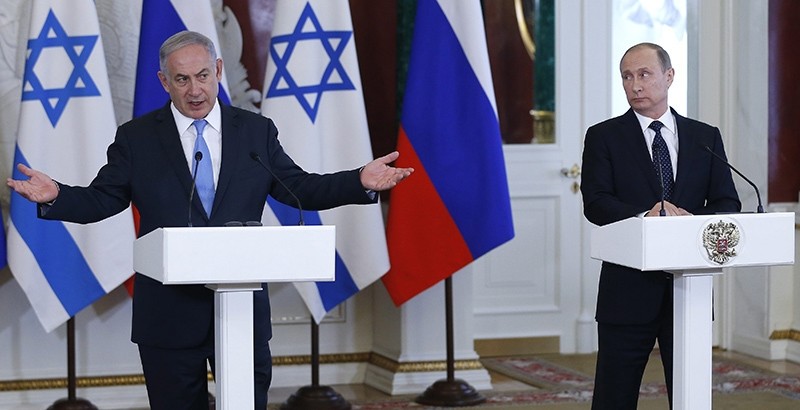 Israeli Prime Minister Benjamin Netanyahu (L) and Russian President Vladimir Putin (R) attend a joint news conference following their talks in the Kremlin in Moscow, Russia, 07 June 2016 (EPA Photo)
by Compiled from Wire Services Jun 07, 2016 12:00 am
Russian President Vladimir Putin gave his backing to Turkish and Israeli efforts to reconcile after nearly six years of frosty relations, as Moscow appeared to be warming its own ties to the Israelis despite being a staunch ally of Iran and Syria.

"The fewer problems between governments, the better," Putin said after meeting with Israeli Prime Minister Benjamin Netanyahu, according to state news agency TASS, adding he views reconciliation between Turkey and Israel "exclusively positive."

Putin spoke after hosting Israeli Prime Minister Benjamin Netanyahu in Moscow for talks that focused on boosting bilateral ties and trying to resolve the situation in Syria.

Turkey and Israel have been holding talks on mending ties which deteriorated sharply over the situation in the Gaza Strip. Israeli media outlets have said the meeting between Putin and Netanyahu was important for moving the talks forward.

Turkey was angered by Israel's bombardment of the Gaza Strip in early 2009. The next year, nine Turkish citizens and one American died when Israeli naval commandos raided the Mavi Marmara aid flotilla heading to Gaza, sending relations into a tailspin. Netanyahu in 2013 expressed regret over the loss of life.

Turkey's Foreign Minister said the two countries are only a couple of meetings short of finalizing a deal, but reports of such an agreement being reached have been circulating for months amid sticking points.

Turkey wants Israel to significantly relax restrictions on the Gaza Strip, which is under a blockade.

Russia and Turkey are themselves stuck in a diplomatic row, after Ankara downed a Russian jet for violating Turkish airspace near the Syrian border last year. Russian economic links to Turkey have been disrupted, particularly tourism to Turkish resorts.

Despite some overtures from Turkish officials, Russia has not indicated it is leaning towards mending fences just yet, though Putin said he has not yet shelved the Turkish Stream natural gas pipeline project but was in need of a "clear position" from European leaders.

Part of the tension between Putin and President Recep Tayyip Erdoğan stems from the Turkish leader's support for the Syrian opposition and rebels, while Moscow has backed the Assad regime with an intense aerial campaign.

Despite Moscow's ties to Assad, and his other main backer, Iran, Putin described Russia and Israel as "unconditional allies" in the fight against international terrorism. Israel views Damascus and Tehran as its key enemies in the region.

The meeting between Putin and Netanyahu is the leaders' second in as many months. A Putin spokesman said they would also discuss war-torn Syria.

Syria is a longtime enemy of Israel, and media reports have speculated that Russia is helping to maintain peace in the disputed region of the Golan Heights, which Israel occupied during a brief war with Syria in the mid-1960s.

Netanyahu told Putin at their meeting that he hoped their countries would "achieve remarkable results in the future that would rest not only on common interests but also on empathy and mutual liking," TASS reported.

The leaders discussed "current issues of bilateral cooperation, including the further strengthening of trade and economic cooperation as well as cultural and humanitarian ties," the Kremlin said in a statement.