Turkish diplomat killed by Armenian group in 1977 remembered in Vatican 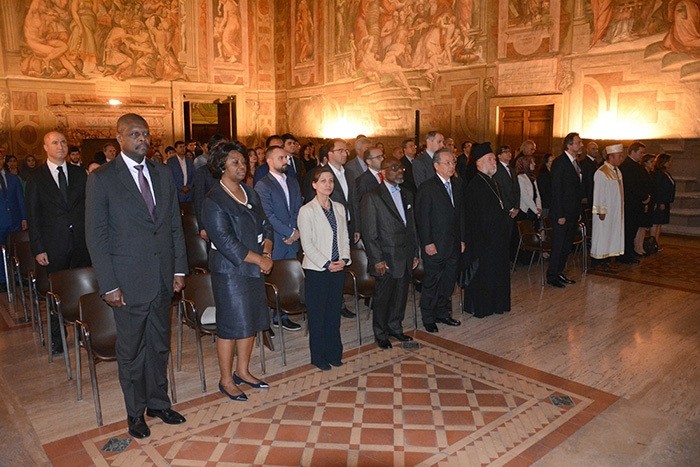 One year after Ankara slammed Pope Francis and withdrew its ambassador to Vatican over the pontiff’s remarks on Armenian 'genocide,' an iftar (fast-breaking dinner) held by Turkish embassy in Vatican, to remember a diplomat killed by Armenian militants, signaled a new era in ties

Palazzo della Cancelleria, a Renaissance-era palace at the heart of Rome, hosted a significant event on Tuesday evening that apparently signaled that Turkey and the Vatican had put behind them a tumultuous year in their relations. The Turkish embassy hosted a commemoration ceremony for Taha Carım, a Turkish ambassador to Vatican who was shot dead on June 9, 1977 in the Vatican by Armenian militants. The ceremony was followed by an iftar (a fast-breaking dinner which Muslims celebrate in Ramadan) attended by Catholic and Orthodox priests.

Angered over Pope Francis' remarks in April 2015 recognizing the Armenian "genocide," Ankara criticized the Vatican and withdrew ambassador Mehmet Paçacı. Paçacı was reinstated ten months later, after the Vatican sought to reconcile with Ankara on the issue and for the first time in years, extended a message of condolence for Taha Carım.

Paçacı joined Monsignor Michael Crotty from the Holy See's Secretariat of State, the Vatican ambassadors from various countries and other dignitaries, in the ceremony which started with one minute of silence, followed by the national anthems of the Vatican and Turkey. The Turkish ambassador recalled remarks by then-Pope John Paul VI who three days after the murder, during an audience with the faithful, condemned the killing of Carım, and thanked the Vatican for allowing them to mark the remembrance at Palazzo della Cancellaria.

A Turkish cleric from Germany recited the Qur'an during the event, and the evening adhan, or call to prayer, was called inside the palace before the iftar dinner.

Ambassador Paçacı said it was the first time an event to remember Carım was held in the Vatican since his killing.

Pope Francis drew public outrage last year after he described the deaths of the Armenian population in Ottoman-era Turkey in 1915 as "genocide," to the chagrin of Turkey which refuses the allegation. In February, the Vatican reached out to Turkey and offered reconciliation through a statement that"appreciated Turkey's willingness to open its archives to historians and create a joint commission of scholars to explore the past events including the tragic events of 1915, regardless of religious and ethnic identity." In the same statement, the Vatican also recognized the killing of Taha Carım by Armenian gunmen. Ankara made a statement and said they appreciated the remarks.

Taha Carım was killed by the Justice Commandos of the Armenian Genocide (JCAG), an Armenian militant group seeking recognition of genocide, and aiming to establish "an independent Armenia" in eastern Turkey, the region where thousands of Armenians were displaced from in 1915. JCAG and the Armenian Secret Army for the Liberation of Armenia (ASALA) were behind the murders of more than a dozen Turkish diplomats and embassy officials in Europe and North America between 1975 and 1986.

Turkey denies the alleged Armenian "genocide," but acknowledges that there were casualties on both sides during the events during World War I.

Turkey regards the deaths of Armenians in eastern Anatolia in 1915 as occurring after some nationalist factions sided with the invading Russians and revolted against Ottoman forces. The subsequent relocation of Armenians resulted in numerous casualties. Turkey describes the events of 1915 as a tragedy for both sides. Ankara has repeatedly proposed the creation of a joint commission of historians from Turkey and Armenia, along with international experts, to tackle the issue.

Last year in April, Pope Francis was at a Mass in the Armenian Catholic rite at Saint Peter's Basilica attended by the Armenian president and church leaders, when he described the events of 1915 as the "first genocide of the twentieth century." Turkey condemned the pontiff, with Foreign Minister Mevlüt Çavuşoğlu saying that "religious authorities should not incite resentment and hatred with baseless allegations."

The issue is still controversial after decades, despite the replacement of the Ottoman Empire with Republic of Turkey eight years after the incidents. Germany recently drew ire from Ankara after its parliament approved a resolution which described the events as "genocide."