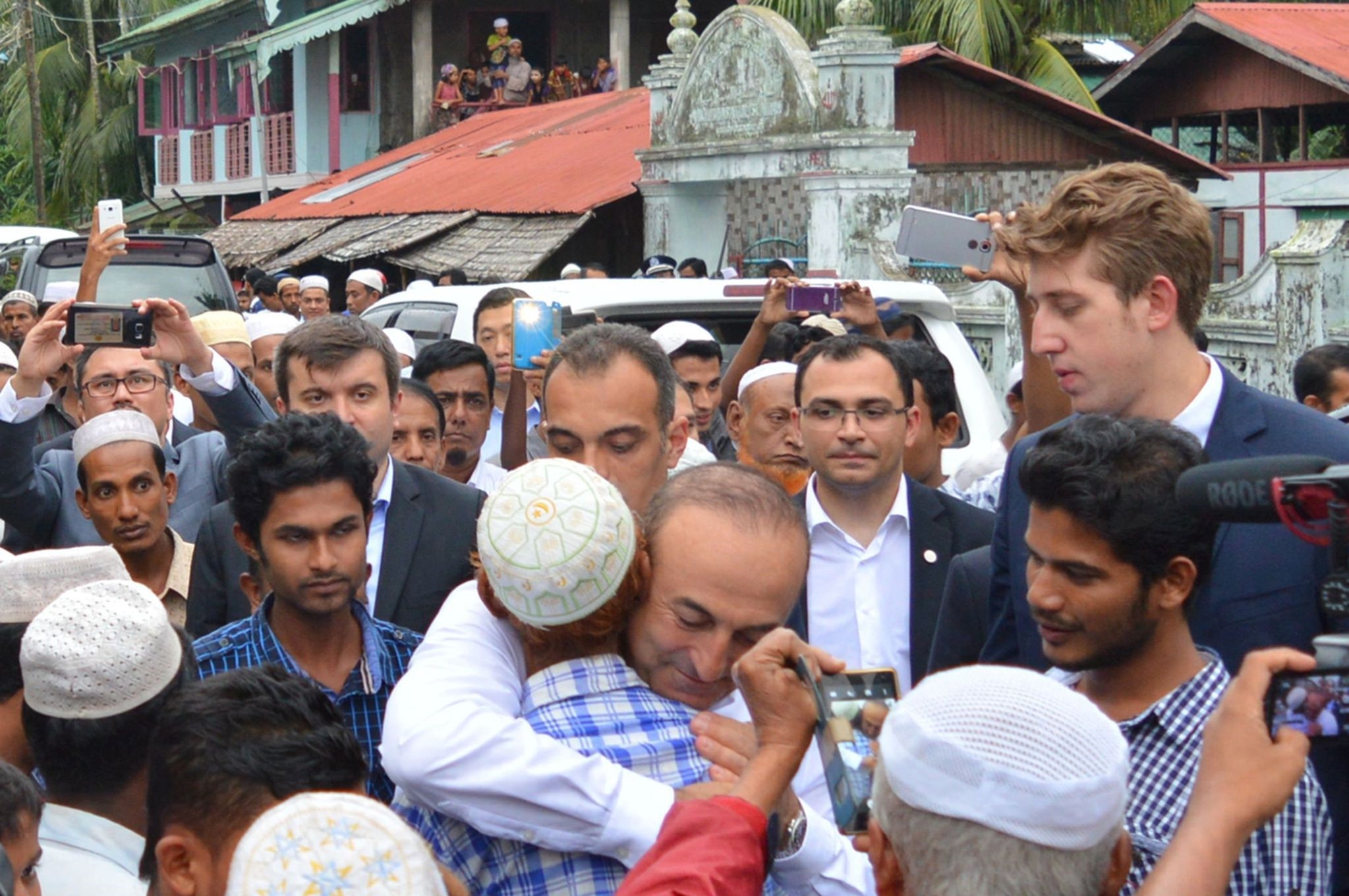 |AFP Photo
by Merve Aydoğan Jun 15, 2016 12:00 am
As part of his official visit to Myanmar, Foreign Minister Mevlüt Çavuşoğlu visited Myanmar's Rakhine state, where he met with local Muslims late Monday and hosted an iftar, the evening fast-breaking meal during Ramadan. Speaking to the media prior to leaving for Rakhine, Çavuşoğlu said Turkey is determined to assist all of the people in the impoverished region, not just Muslims. Çavuşoğlu met with State Councillor Aung San Suu Kyi, President Htin Kyaw and armed forces Commander-in-Chief Min Aung Hlaing. Myanmar took a momentous step in late March as a trusted aide to the ruling party's leader Aung Suu Kyi took over as the country's president, officially ending more than 50 years of military control over the government. Çavuşoğlu praised the new Myanmar government and vowed to "continue to support it morally and financially."

Addressing 4,000 Rohingyas prior to the iftar, Çavuşoğlu vowed to stand with them and that Turkey will undertake new projects in Sittwe, including "schools, clinics, and infrastructure" through the Turkish Cooperation and Coordination Agency (TİKA). Çavuşoğlu also visited an orphanage and school renovated by TİKA, where he said Turkey will continue its support for the reconciliation process between the Myanmar state and the country's Muslim community, which has been troubled by collective violence, with Rohingyas and other ethnicities and religious groups reliant on aid in internally displaced person camps. While Çavuşoğlu promised the Rohingya community that he would visit again, he said: "Turkey is ready to support the people here through humanitarian aid and rights advocacy. We have also offered to cooperate with local authorities and the state. Issues such as citizenship have already been undertaken." During Çavuşoğlu's visit, relief supply kits, including 50 kilograms of rice and other food items from TİKA, were distributed to locals in cooperation with the Turkish Embassy in Myanmar. TİKA distributed food aid to local 500 Buddhist families as well.

Following Myanmar, Çavuşoğlu left for Sri Lanka to hold official talks with the country's president, prime minister and parliament speaker. Çavuşoğlu will hold meetings with Sri Lankan Foreign Minister Mangala Samaraweera along with the Development Strategies and International Trade Minister Malik Samarawickrema. The officials of the two countries will also sign a memorandum of understanding for cooperation in diplomatic education, information exchange and documentation. Although economic relations between Turkey and Sri Lanka are limited, diplomatic sources have said that the visit is in an attempt to enhance relations in all fields, especially trade and economy. Çavuşoğlu's visits are expected to continue with an official visit to Afghanistan after Sri Lanka.
Last Update: Jun 15, 2016 12:34 pm
RELATED TOPICS