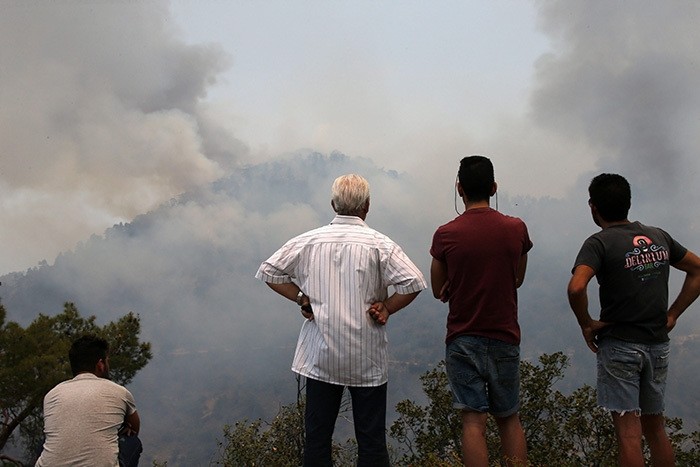 Greek Cyprus’s conditional acceptance of aid offered by Turkey to fight ongoing wildfires on Cyprus angered Ankara, which accused it of exploiting a humanitarian issue

Turkey and Greek Cyprus have long been at odds over the future of the divided island, and an uncontrollable wildfire may add more fuel to the debate over the island's sovereignty, so to speak.

The blaze, which has raged since Sunday in the Solea Valley in the northern foothills of the Troodos Mountains, has left two firefighters dead and destroyed at least 15 square kilometers of farmland and forest.

Efforts to control it have been hampered by dry conditions as the island swelters under temperatures topping 40 degrees Celsius.

Turkey, the island's closest neighbor to the north, has offered to send two firefighting helicopters and a plane to Cyprus on Tuesday to help fight the forest fire. Turkish Cypriot President Mustafa Akıncı relayed the proposal to Greek Cypriot President Nicos Anastasiades. Anastasiades responded that they would accept the proposal, but only if Turkey would be a part of a joint force of firefighting of European countries and Israel. This means Turkish crews would be deployed directly to Greek Cyprus, which Turkey is alone in not recognizing, instead of delivering the plane and helicopters to Turkish Cyprus – the northern third of the island – which is only recognized by Turkey.

Ankara accuses Greek Cyprus of taking advantage of a sensitive issue to push for its recognition by Turkey.

Foreign Minister Mevlüt Çavuşoğlu, who held a joint press conference with his Turkish Cypriot counterpart Tahsin Ertuğruloğlu in Ankara on Wednesday, said it was "unacceptable." He said Turkey has always been among the first responders to any disaster around the world and was leading in the international community for humanitarian aid it delivered per capita and with development aid to other countries reaching to $4 billion. "So, when the fire broke out on the Greek side and they were unable to extinguish or control it, we offered help. We held repeated talks both with [Akıncı] and Greek Cypriot leaders," he said. Çavuşoğlu said Greek Cypriots tried to relocate landing points for helicopters and the plane to the part of the island they controlled, but it was "unacceptable for Turkey."

He said that Anastasiades had snubbed an informal dinner hosted by President Recep Tayyip Erdoğan in May where Akıncı was also invited, implying Greek Cyprus has been hostile to a friendly approach. "We showed our hospitality and hoped that over an informal meeting, the Greek Cypriot president and Mr. Akıncı would meet like they did at other international conventions, but he did not want it and made unpleasant statements," he said, referring to statements from Anastasiades that blamed Turkey for stalling talks on the reunification of the divided island for "unilateral moves designed to upgrade the [Turkish Cypriot] pseudo-state."

"I call them, at least, not to exploit the humanitarian matters. You do not have to respond to our offer but you should not exploit such an issue," he said.

Cyprus have long been divided between a Turkish and Greek Cyprus after Turkey sent troops to the north in 1974 to protect the Turkish community from attacks by Athens-backed Greek groups. In the following decades, Turkish Cyprus was established and Greek Cyprus – officially the Republic of Cyprus – became the only widely recognized official entity in the international community to Ankara's chagrin, which refuses to recognize it and urges a solution to the issue through talks between the two communities.

The two sides seek to reunify their communities under mediation from United Nations, but the negotiations stalled in 2014 after a dispute over rights to offshore gas exploration. After Akıncı's election as president last year, hopes revived for talks and both sides expressed faith in the progress they have made.

Tuğrul Türkeş, the deputy prime minister in charge of Cypriot affairs, said both Turkey and Turkish Cyprus are worried about the forest fire and are ready to help. He dismissed the notion of disaster diplomacy in the media and said that politics and diplomacy has no place when responding to a disaster. "Mr. Akıncı righteously offered help first, but Greek Cyprus once again showed they do not care. Even in the case of simple aid, they still debate it in terms of their own diplomacy and complicated politics. I hope they will come to their senses as soon as possible and the fire is contained," he said.

Authorities expressed optimism yesterday that they could contain the island's worst forest fire in years after additional firefighting aircraft arrived from France and Italy.

Three French and one Italian aircraft joined two British, four Greek and six Israeli aircraft that were already helping to tackle the second massive wildfire to hit the Mediterranean holiday island in less than a week.

Government spokesman Nicos Christodoulides said that with so many planes in the air he was "optimistic" the fire would be brought under control soon.

"Today we hope that with the help from so many countries in the air we can succeed in controlling the fire," he told public radio.

Christodoulides said Russia had also offered to send firefighting planes, but he said they might not be needed. Similarly, Turkish Cyprus has offered aid but Greek Cyprus has turned it down, citing "enough assets to tackle the fire," according to media outlets.
Last Update: Jun 22, 2016 6:59 pm
RELATED TOPICS