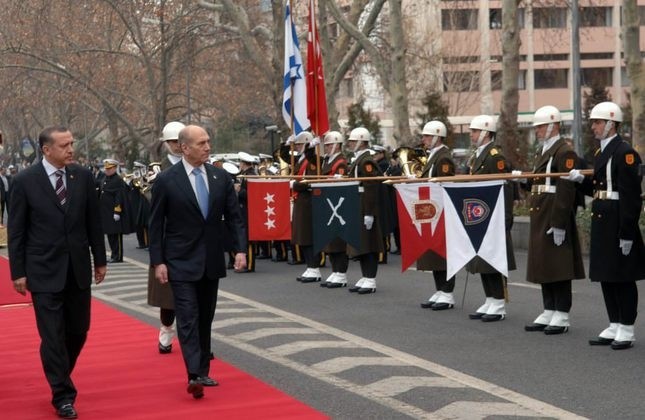 Then-Prime Minister Erdou011fan with his Israeli counterpart Ehud Olmert in the welcoming ceremony during his visit to Ankara on Feb. 15, 2007.
by daily sabah Jun 23, 2016 12:00 am
Israeli security cabinet is set to meet next Wednesday to review terms of reconciliation agreement with Turkey, the Jerusalem Post reported late Thursday.

In the scheduled meeting, the cabinet is expected to approve a rapprochement agreement with Turkey which is scheduled to be finalized on Sunday, the Israeli paper said, citing senior government officials.

Israel's newly appointed Defense Minister Avigdor Lieberman, who was firmly opposed to an agreement with Turkey before he took over his new position last month, is not expected to oppose the arrangement, the paper also said.

Turkey was a key regional backer of Israel until the two countries cut ties in 2010 following the deaths of 10 Turkish activists on a Turkish aid ship bound for Gaza due to a raid by Israeli commandos.

Israel apologized to Turkey in 2013, in what many thought would trigger a warming in ties, but tensions rose in 2014 after Israel launched a military offensive in Gaza.

Ankara insists that all of its conditions must be met, including ending the Gaza blockade and compensation for the Turkish activists killed in the Mavi Marmara raid. The only condition that Israel has satisfied so far came when Israeli Prime Minister Benjamin Netanyahu apologized for the raid. Israel has also agreed to pay compensation for the victims but it has not been finalized yet.

After years of bitter accusations and inflammatory rhetoric, the two sides held secret talks in December to seek a rapprochement, with another round taking place in February in Geneva.
Last Update: Jun 24, 2016 1:03 am
RELATED TOPICS