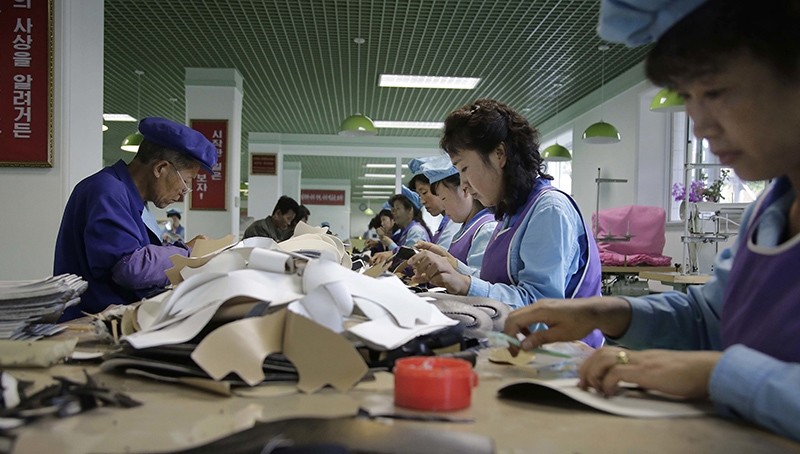 The bright red slogans hang from buses, government buildings and even some restaurants and gas stations, urging North Koreans to work harder to make the country's 200-day "speed campaign" a success. "Have you carried out the plan for today?" one poster asks.

It's the second such drive this year, and while outside economists doubt their effectiveness, they reflect leader Kim Jong Un's desire to energize the country's sputtering economy. That goal is fettered by international sanctions against Kim's other main priority, his nuclear program, increasing the pressure on North Koreans to dig themselves out of economic stagnation.

In a collectivist society, slacking off isn't taken lightly. Least of all now.

"If you look out the window, you won't see anyone just walking around," said Chang Sun Ho, the manager of a small shoe factory in Wonsan, a port city on North Korea's east coast. "Everyone is working."

The history of North Korea's speed campaigns, which were also common in the former Soviet bloc countries and in China, is almost as old as the country itself.

The nation's founder, Kim Il Sung, called a major one named after a mythical winged horse that could fly 1,000 "li" (about 400 kilometers) to rebuild the country after the 1950-53 Korean War. The current drive has been dubbed the "Mallima" campaign — suggesting a winged horse that is 10 times faster.

Loading on more work for a national political objective might cause a lot of grumbling or even strikes elsewhere. But in a country where patriotism is strong, perseverance a hallowed virtue and toeing the official line a key survival strategy, you won't hear anyone complaining here — at least not publicly.

North Korean officials allowed Associated Press reporters to tour and conduct interviews at the shoe factory, which offers a window into how such campaigns actually play out on the ground.

With 220 workers, it produces about 700 pairs of shoes a day — the central government tells them how many produce. The shoes are distributed to department stores and other places around the country. The factory does not export any of its products, which officials say are made strictly with domestically produced materials and locally made machinery, in keeping with the government philosophy of "self-reliance."

Manager Chang said the factory met its annual production goal several weeks ago, though it is still June.

Kim Jong Un himself visited the factory in November. At his direction, it is now focused on making lighter, better quality shoes and providing a wider variety to make North Korea's shoe production "world class."

"The marshal has said he has adopted this factory as if it were his own," Chang said, referring to Kim Jong Un by his most commonly used title. "So it is like we are working for our father. That's all the motivation we need."

Just to be sure, however, an official from the Ministry of Light Industry has been dispatched from Pyongyang to monitor and supervise its operations for the entire 200-day period.

Factory officials said they have not hired any extra hands to boost production, and that they don't need to resort to monetary rewards or firing threats. The workers get their basic necessities from the government but can receive monthly bonuses if the factory sells more shoes than its government-set target.

Peer pressure is also clearly a strong part of the mix.

Workers are divided up into sections and smaller work groups, whose collective output is posted in large bar graphs around their workplaces for all to see. Manager Chang said that if a worker is not making the grade, he or she is paired up with a more productive partner. He said no one wants to be labeled as lazy because, with the standing of their whole group at stake, they could end up being officially regarded as a problem to the whole factory "family."

Outside economists say speed campaigns focus more on short-term bumps in production and overtly political goals of the re-enforcing ideological principles of the primacy of loyalty and group action than the kind of sustainable and meaningful long-term growth the North's centrally controlled economy really needs.

They also suggest the North's economy is hamstrung by its continued push to develop nuclear weapons and the missiles needed to deploy them against targets in the United States or other hostile nations. They say that because of international sanctions, North Korea's chances of real improvement in its domestic economy are slim at best.

This is the second speed campaign his leadership has called this year. The first, which lasted 70 days, ended just before the May party congress. The current campaign, which will continue until Oct. 10, began almost as soon as the congress was over. The party congress was the first in 36 years and further cemented the young leader's stature as the country's supreme leader.

Though the speed campaigns play an important political and social role in asserting the regime's power to rally the nation, improving the economy, which lags far behind neighboring China, Japan and rival South Korea, does genuinely appear to be a key goal of the North Korean leadership.

That desire is also reflected in the North's issuance of a five-year plan during the congress. Few details have been made public, but it's the first such plan North Korea is known to have initiated since the 1980s, when Kim Il Sung, Kim's grandfather, was in power.

Kim's father, Kim Jong Il, stressed a more military-oriented approach. North Korea's launch of more missiles on Wednesday underscores that Kim Jong Un is not about to sway from his father's emphasis on building up the military, despite the cost in lost trade with the outside world and the increased political and diplomatic isolation it brings.

Those North Koreans who are allowed to speak to Western media, meanwhile, are eager to show they are doing their part.

"Normally, I work eight hours a day, from 8 in the morning until noon, and then from 2 until 6 in the evening," said Kang Jong Jin, a 28-year-old former soldier who attaches soles onto shoes at the Wonsan factory. "Now I sometimes stay longer. No one has to tell me to do it. I just do."

Kang, who wants to be an engineer, said he also started taking long-distance learning courses at the factory, which has a teleconferencing room linked to a major university in Pyongyang.

"The marshal wants us to improve our scientific and technological skills," he said, referring to another priority topic at last month's party congress. "So this is how I want to contribute."