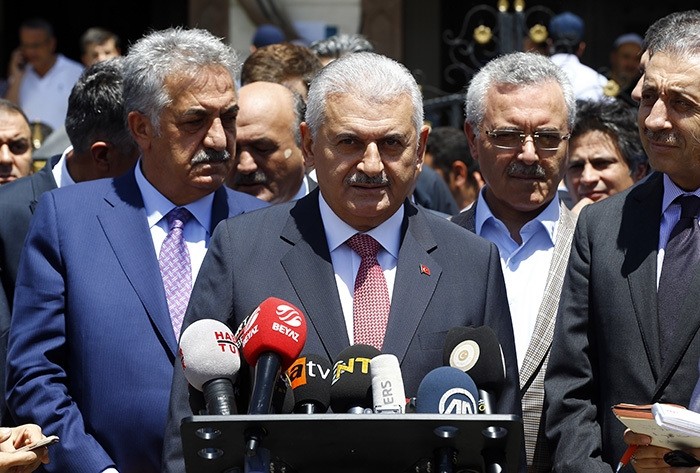 PM Yıldırım underlined that Turkey supports a unified and strengthened future for the EU. However, he also added that the Brexit decision show EU must revisit its vision for the future and become more inclusive.

Prime Minister Binali Yıldırım said on Friday that Turkey stands by the unity of the EU as it is an important factor for the stability of the union and the region after the Brexit vote in the United Kingdom.

Speaking to reportes after the Friday prayer in Ankara, PM Yıldırım underlined that Turkey supports a unified and strengthened future for the EU, saying, "This is an important issue for peace within the union and the stability of the region."

"The EU must leave a mentality that isolates itself from the other countries in the region. They should be in search of a more embracing vision and a future," the prime minister added.

Commenting on the Brexit decision, Yıldırım said, "I hope that this decision is a right step for the people of Britain."

Yıldırım added that the addressee of the Brexit decision is the EU, and that the union must revisit its plans for the future.

"It shows that its inclusivity is not at an ideal place which encompasses all the members. With the referendum, such dissatisfaction has also been revealed. Turkey has been a country working towards becoming a member in the EU. We, too, have shared our observations and findings on the same matters with the authorities," he stated.

Yıldırım also criticized the British Prime Minister David Cameron's rhetoric during the Brexit campaign, which included Turkey's EU accession process. Cameron had made comments implying that Turkey is far away from joining the union in the near future.

"With this decision, British voters have also shown Cameron that his thoughts on Turkey were not right," he said.

Responding to a question on whether Turkey will hold a referendum on resuming the talks on accession to EU process, Yıldırım answered that there is nothing more natural than allowing people to decide, once the process is completed on full membership.