Erdoğan expressed regret for downing of Russian jet in letter to Putin: Kremlin 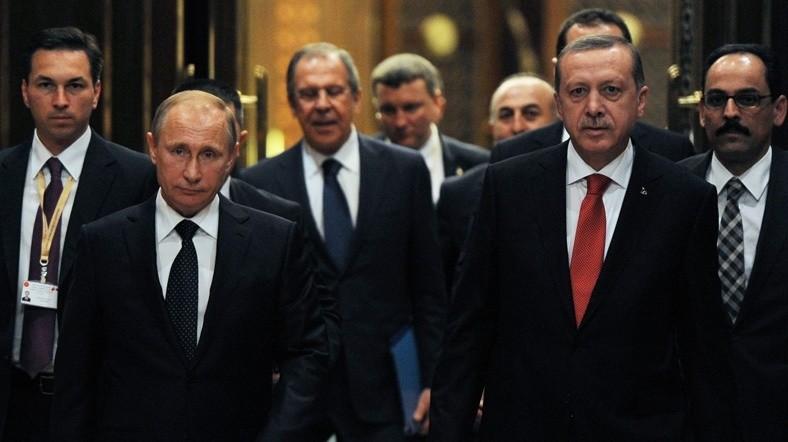 President Recep Tayyip Erdoğan has expressed regret for the downing of a Russian military jet to Vladimir Putin, Presidential spokesperson İbrahim Kalın and Putin's spokesman said on Monday, an attempt to mend ties which were deeply strained last November.

A statement released by the presidential spokesman said that President Erdoğan sent a letter to President Putin to express his regrets about the downing of the Russian warplane in November 2015 and apology to the family of the Russian pilot who died in the incident.

''In the letter, the President stated that he "would like to inform the family of the deceased Russian pilot that I share their pain and to offer my condolences to them. May they excuse us" the statement read and continued by adding that President Erdoğan urged Putin to restore traditional friendly relations between the two countries.

Kalın also noted that Turkey and Russia have agreed to take necessary steps without delay to improve bilateral relations. Later on the same day, Prime Minister Binali Yıldırım said that President Erdoğan will give a phone call to Russian President Putin on Wednesday or Thursday. This will be the first time the two presidents talk since the downing of the Russian warplane.

"I think we have reached an understanding on this affair. We will put this incident behind us and continue on our path," the premier said.

"Erdoğan expressed his deep regret over the incident and underlines the willingness to restore relations, fight against terrorism", Kremlin spokesman Dimitry Peskov said.

He added that Erdoğan said he wanted to restore the traditionally friendly relations between Turkey and Russia.

Meanwhile, an official has reportedly said that prosecutors reopened the case against Alparslan Çelik, the suspected killer of Russian pilot shot down last November.

Çelik had been remanded in custody for 37 days and was released after the prosecutor decided to drop charges against him in May.

Russia's sanctions hit itself as well. Due to sanctions imposed on Turkish goods, vegetable and fruit prices in Russia have risen.

In the fallout after Turkey shot down the Russian jet, Moscow announced several wide-ranging sanctions on Turkey starting in January, including the end of visa-free travel and a ban on Turkish food products. Russia also called for its nationals to boycott Turkey as a tourist destination.

Turkey and Russia have for years differed on policy toward Syria and Ukraine. Ankara has not recognized Russia's 2014 annexation of the Ukraine's Crimea, and has repeatedly accused Moscow of supporting the Assad regime in Syria.