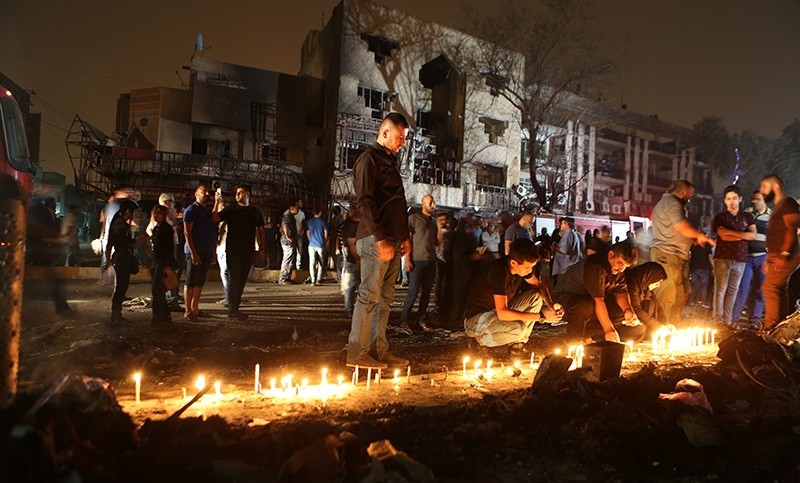 People light candles at the scene of a massive car bomb attack in Karada, a busy shopping district where people were shopping for the upcoming Eid al-Fitr holiday, in the center of Baghdad, Iraq (AP Photo)
by Daily Sabah with AA Jul 04, 2016 12:00 am

Prime Minister Binali Yıldırım called his Iraqi counterpart Haider al-Abadi on Sunday to offer condolences for the brutal terrorist attack which claimed over 213 lives at a busy shopping district in Baghdad, where people were shopping ahead of the Eid holiday.

He offered his condolences to Haider al-Abadi during the conversation, according to a Prime Ministry source who spoke on the condition of anonymity due to restrictions on speaking with the media.

The prime minister said Turkey was ready to provide any support to the wounded and added that Iraq's territorial integrity was important.

"In the name of country and our nationals, I strongly condemn the bomb attacks that happened in our friend and brother Iraq's capital Baghdad," he said.

He added: "We view each of the Iraqi people as our brother, whatever their origins and beliefs are... The country which will best understand the pain and ordeal caused by the bomb attacks in Iraq is Turkey."

A car bomb hit al-Karada, a busy shopping district in central Baghdad, early Sunday, killing at least 150 victims, while a separate blast killed five others at a market in the al-Shaab neighborhood.

The al-Karada attack was claimed by Daesh but conflicting reports have emerged about the cause of the second attack. Some have said it was another bombing, however, government officials have claimed it was the result of a fire.

The attack in Baghdad occurred just days after Daesh terrorists killed 45 victims in a triple suicide bombing at Istanbul's main airport on Tuesday, and a day after the terrorists took several people hostage and killed 20 at a restaurant frequented by diplomats in Bangladeshi capital Dhaka.