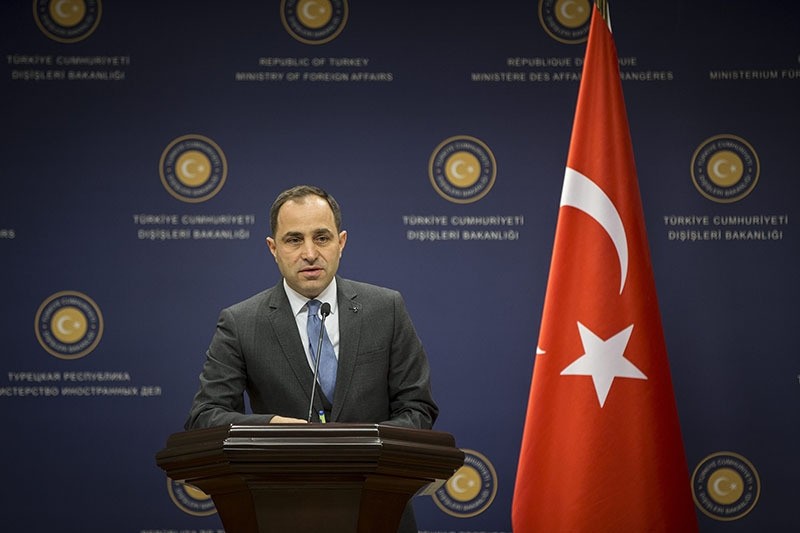 Turkey's Ministry of Foreign Affairs denied a quote published by French daily Le Monde on July 4 in an interview conducted with Minister Mevlüt Çavuşoğlu, which said that Turkey and the U.S. have reached a "secret military deal" regarding the status of northern Syrian town of Manbij.

Answering to a question regarding the matter on Wednesday, Foreign Ministry Spokesperson Tanju Bilgiç stated that Çavuşoğlu did not use such an expression during the interview.

Bilgiç stated that upon the Le Monde correspondent's question on what kind of an agreement was reached between Turkey and the U.S. on Manbij, Çavuşoğlu replied that there is a cooperation between military officials of the two countries and he could not give information regarding the its details.

Bilgiç's statement came after Turkish and international news outlets released reports on an agreement within Turkey and the U.S. based on the interview.

The status of Manbij between warring parties in Syria remains a priority of Turkish policies in the region. The Daesh-controlled town is being held under siege by the YPG-dominated Syrian Democratic Forces (SDF) following a large scale attack launched in late May that has received substantial air support from the U.S.

The attack aims to capture Manbij and the town of al-Bab, which lies further west, and thereby to connect YPG-held territories surrounding towns of Afrin and Kobani. Resultantly, Daesh's main supply and recruitment route from Turkey will be cut and the group's attacks against Turkey will be prevented. Daesh's control over Syria's populated areas will be also confined to its bastion Raqqa and territories around Euphrates River further east.

However, despite the inclusion of local Arab and Turkmen groups in the SDF and apparent U.S.- supported forces, Turkey monitors the SDF's moves with great suspicion, as it considers YPG as the Syrian offshoot of PKK terror organization.

PKK, recognized as a terror organization by the U.S and NATO, has resumed its 40-year long armed campaign against Turkish state in July 2015. The PKK and its splinter groups have increasingly used suicide and car bombing attacks on both civilian and military targets ever since, with investigations pointing to YPG connections and training in several attackers. The control of the territory lying just south of its entire Syrian border by a hostile group is regarded by Turkey as a grave threat to its national security, especially after reports of YPG attacking or forcefully relocating local Arabs and Turkmens to consolidate its control in areas where Kurds do not constitute the majority.