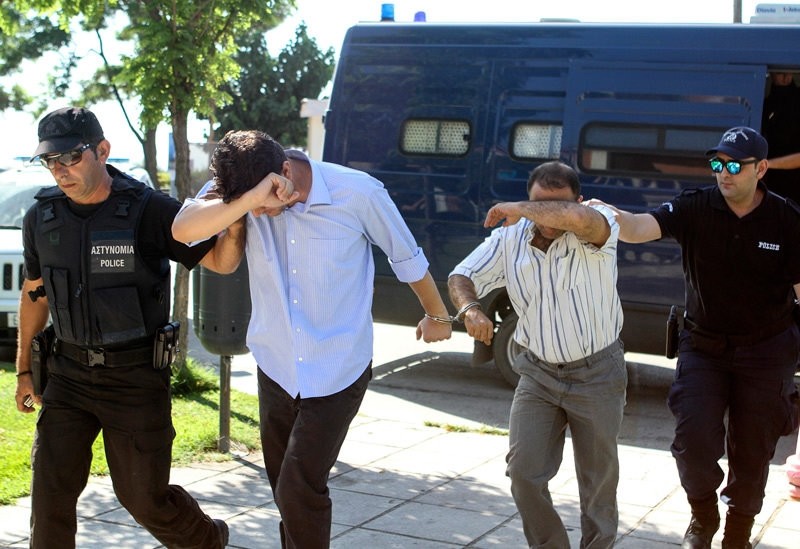 Two of eight Turkish soldiers who fled to Greece in helicopter and requested political asylum after a failed military coup, are brought to prosecutor in Alexandroupolis, Greece July 17, 2016. | REUTERS Photo
by Daily Sabah with AA Jul 17, 2016 12:00 am

Eight Gülenist coup soldiers who attempted to stage a coup to overthrow the democratically elected president and government but failed and escaped to Greece to seek asylum, faced Greek prosecution for their ‘illegal entry' and ‘damaging friendly relations between Turkey and Greece'

The soldiers who fled to Greece after the failed July 15-16 coup attempt will face accusations of "illegal entry" and "damaging friendly relations between Turkey and Greece," a lawyer for them said.

"They will be sent to the prosecutor [on Sunday]. Then the judicial process will begin," Lia Marinaki told Anadolu Agency. "Under normal circumstances, the process could take a year. It is certain that they do not want to go back to Turkey; they are afraid of execution," she said.

Previously, a team from the Turkish Armed Forces (TSK)arrived in Greece on Saturday to bring back the eight soldiers involved in the coup attempt who fled to Greece after it failed.

Greek officials confirmed that a team from the TSK had arrived in Greece to bring back the helicopter the soldiers used to escaped.

Greek police had said earlier that the helicopter landed at Alexandroupolis Airport near the Greek-Turkish border at around 11:50 a.m. local time.

Earlier Saturday, Foreign Minister Mevlüt Çavuşoğlu tweeted that Turkey had "requested the immediate surrender of the eight traitor soldiers who fled to Greece in a helicopter."

Çavuşoğlu later said a colonel was the highest-ranking of the eight soldiers. Speaking to reporters following a special session of Parliament, Çavuşoğlu said he received a telephone call from Greek Foreign Minister Nikos Kotzias and they discussed developments concerning the attempted coup as well as the soldiers who fled to Greece.

"They will expedite the extradition process," he said, adding: "God willing, we will bring those traitors to Turkey and surrender them to justice."

During the call, Kotzias reiterated Athens's condemnation of the attempted coup and stressed that the issue would be examined by the Greek government, which would follow the relevant procedures under international law, according to a Greek Foreign Ministry statement. Kotzias said the since the suspects are facing charges of violating the constitutional order and attempting to dismantle the nation's democracy it will be taken under very serious consideration, the statement said.

On Saturday, Greek Prime Minister Alexis Tsipras telephoned President Recep Tayyip Erdoğan to confirm that "whatever necessary" would be done to ensure the extradition of the eight Turkish military officers who fled to Greece after Friday's failed coup attempt.

Tsipras said there is no room for coups in democracies, and the Greek government stands by and respects the elected government of Turkey and the will of the Turkish people, according to a Turkish presidential source. Erdoğan thanked Tsipras for his sentiments of support, the source said, speaking on condition of anonymity due to restrictions on speaking to the media.