Commercial electric power restored at İncirlik Air Base in Turkey 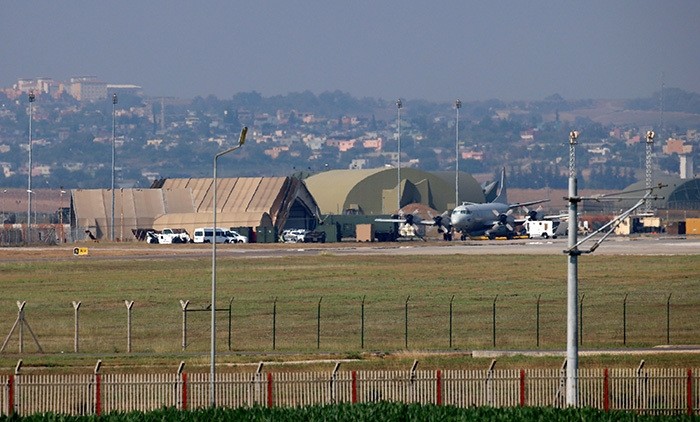 This file photo taken on July 28, 2015 shows a military aircraft on the runway at Incirlik Air Base, in the outskirts of the city of Adana, southeastern Turkey. (AFP Photo)
by Daily Sabah with Reuters Jul 22, 2016 12:00 am

Commercial electric power was restored on Friday to a Turkish air base used by U.S. forces in the fight against Daesh, a week after it was interrupted during an attempted military coup against Turkey's democratically elected government and President Recep Tayyip Erdoğan.

U.S. European Command in Stuttgart, Germany, said in a statement that commercial electric power was restored to Incirlik Air Base, and "there is a steady flow of hot food, water and fuel to support our service members and civilians in Turkey."

The Turkish base, which is also used by several thousand U.S. personnel, had been operating on generator backup power since July 16. Backup generators remain an option if the base loses commercial power again, the European Command statement said.

European Command said the U.S. and Turkish militaries were working to ensure the base remained "fully prepared to take on a myriad of missions as we work together to defeat terrorism."

The air space around Incirlik was closed during the attempted coup amid concerns a tanker aircraft commandeered from the base was used to refuel aircraft involved in the attempted overthrow.

The Turkish commander of the base was detained for complicity, a senior official said. Turkish Foreign Minister Mevlüt Çavuşoğlu said some troops at the base were involved in the attempted coup.

The air space around the base quickly reopened in the days after the attempted coup so that U.S. warplanes involved in the fight against Daesh militants in Iraq and Syria could continue their operations.