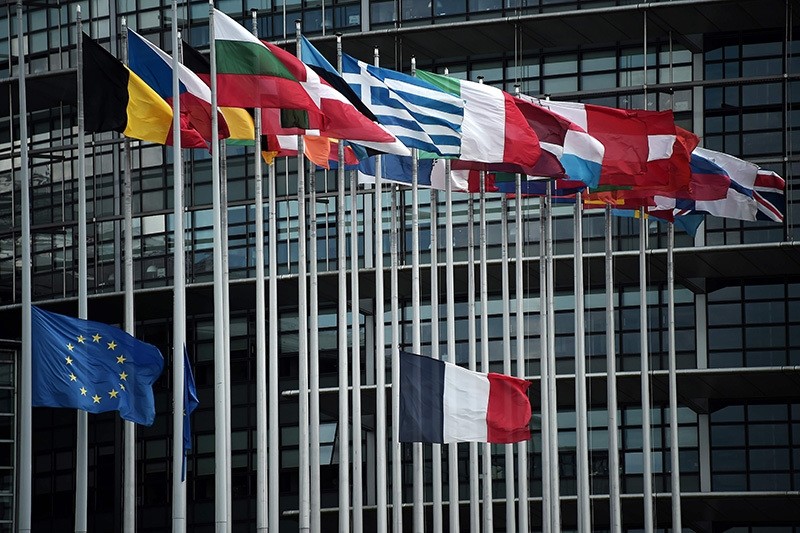 This photo taken on July 15, 2016 shows the French and European Union flags flying at half-mast in front of the European Parliament (AFP Photo)
by Anadolu Agency Jul 23, 2016 12:00 am

The co-chairman of a joint body of Turkish and EU lawmakers has called on Europe to restrict the activities of the Gülenist Terror Organization (FETÖ) on the continent.

"We call all on our partners and allies to take all possible measures to prevent the activities of this group on their soil," Ahmet Berat Çonkar said in a letter sent to the European Parliament chair and members Friday.

Çonkar, co-chair of the Turkey-EU Joint Parliamentary Committee, said the coup attempt on July 15 was quickly revealed to be a terrorist action and pro-coup soldiers fired on Turkish civilians, bombed the Turkish parliament and the presidential complex.

He added that the Turkish Armed Forces were against the plot from the beginning but a small group from the air force, gendarmerie and various armed units supported the coup attempt.

Çonkar stated that Turkish police and public prosecutors quickly took necessary precautions to block the attempt in a short time.

"Above all, it was the Turkish nation who thwarted the plot. They displayed historic solidarity as they took to the streets and remained defiant. They stood bravely in front of the tanks, military attack helicopters and F16s, and reclaimed their democratic rights", he said.

"The terrorists tried to broadcast their message by taking over studios of the state TV (TRT) and raiding private media outlets as well as TURKSAT, the satellite TV provider. Yet the plotters' attempt to control the media did not last long. It must be noted that the Turkish media also played a key role in subsiding the coup attempt," Çonkar said.

He added that throughout the process, all political parties and their deputies stood by democracy, democratic politics and the constitution.

Çonkar said: "We have solid proof that this coup attempt was staged by FETO."

"We are pleased to see that out friends, allies, partners and international organizations are standing by Turkey and Turkish democracy in solidarity and with a principal stance, on the basis of common values", Çonkar remarked.

Çonkar added that the president, prime minister, government, parliament and Turkish people have defeated the coup attempt and that terrorists would face penalties in accordance with the law.

The deadly coup attempt began late July 15 when rogue elements of the Turkish military tried to overthrow the country's democratically-elected government, killing at least 246 people and injuring more than 2,100 others.

The government said the attempted coup was organized by followers of U.S.-based leader of FETÖ, Fetullah Gülen.

Gülen is accused of a long-running campaign to overthrow the state through infiltrating into Turkish institutions, particularly the military, police and judiciary, forming a 'parallel state'.