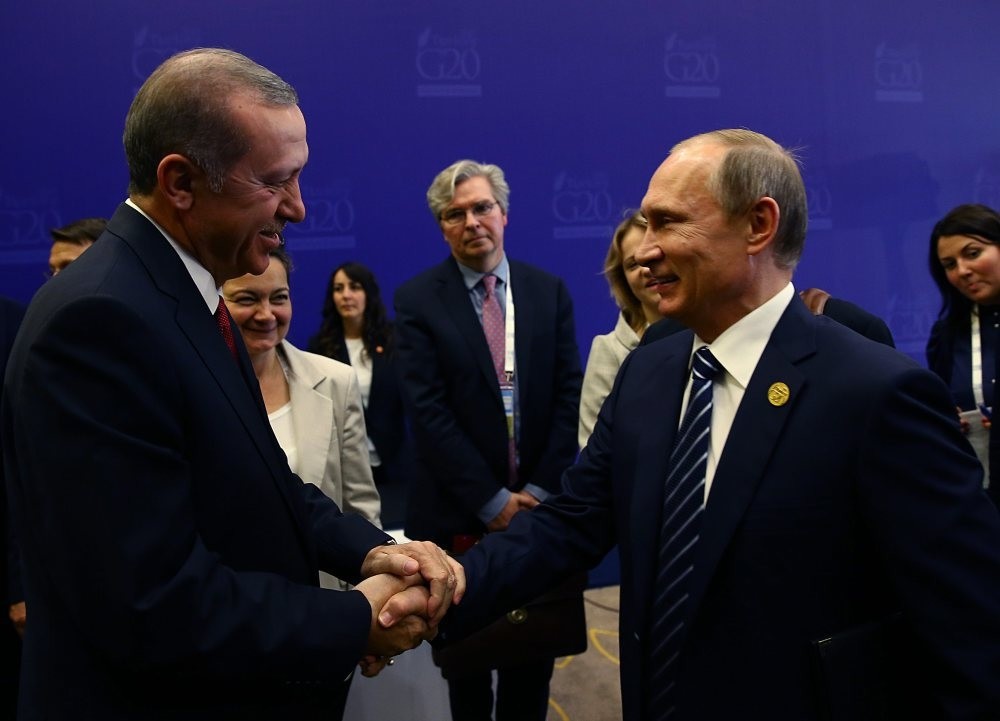 Once two close friends, President Erdou011fan (L) and Russian President Putin, seek to return to friendlier times, as they are expected to meet twice in August.
by Yunus Paksoy Jul 29, 2016 12:00 am

The involvement of two fighter jet pilots in the FETÖ coup attempt who downed a Russian jet in November, heavily damaging Turkish-Russian relations, has led to questions. Analysts argue that FETÖ, supported by the U.S., wanted to deteriorate Turkish-Russian ties through the downing of the jet

The world woke up to shocking news on Nov. 24 last year, when a Russian fighter jet was shot down on the Turkish-Syrian border for violating Turkish airspace. As Ankara and the Kremlin exchanged harsh words in response to the crisis, the two countries' strong relations took a major hit, entering a fragile and uncertain new phase. Though the two countries were waging a diplomatic war over the shooting down of the Russian jet, Turkey is now debating whether or not the two pilots who shot down the Russian jet were in fact members of the Gülenist Terror Organization (FETÖ) led by U.S.-based Fethullah Gülen after they were detained for their involvement in the July 15 coup attempt. Turkey and Russia had begun to forge a close alliance when the unprecedented jet crisis spoiled the whole script.

While the wake of the July 15 coup attempt has brought with it a growing consensus among the public that FETÖ members may have orchestrated the downing of the jet, on Nov. 24 there were only a handful of people who questioned the circumstances surrounding the crisis.

"The investigation is still underway. We will see if they were FETÖ members, but it is normal for people to make such claims because [Turkish-Russian] ties were cut off so abruptly when everything was going quite well," Emre Erşen, an academic at Marmara University, told Daily Sabah.

"I asserted back on Dec. 26 at a panel held in the province of Samsun, that FETÖ pilots had downed the Russian jet," Cem Küçük, then-Star daily columnist, who was the first in the Turkish media to make such a claim, told Daily Sabah. Küçük pointed to the close economic and diplomatic relations between Ankara and the Kremlin as a motive for FETÖ to shoot down a Russian fighter jet.

Sevil Nuriyeva, a columnist for the Star daily specializing in Turkish-Russian relations, told Daily Sabah that two strategic partners, Turkey and Russia, had fallen victims to a plot by FETÖ and the U.S. "It was a planned plot aimed at spoiling relations," Nuriyeva said, adding that the detention of the two FETÖ pilots is welcomed by those favoring good Turkish-Russian relations, while Americans do not support it.

Turkish-Russian relations took multiple hits after the Kremlin directed baseless accusations at Ankara as well. Moscow regularly claimed that Ankara had provided help to DAESH in the form of making oil purchases from the terrorist group.

"The U.S. does not like anyone having close ties with Russia one bit. FETÖ shot down the Russian jet, assuming that it would please Washington," Küçük contended, adding that a FETÖ imam may have given the orders.

Now that President Erdoğan and the government have just barely escaped a coup attempt believed by many to have been supported by the U.S., newly accelerated relations with Russia may give Ankara another option. Swift improvement in relations since Erdoğan's letter to Putin in late June could improve further in the wake of the coup attempt.

"Turkey is having trouble with the U.S. over Gülen's extradition. Russia emerges as an alternative partner in the region in this regard," Erşen asserted, adding that Erdoğan's visit to Russia in early August will shape the future of Turkish-Russian relations.

Commenting on the Kremlin's stance toward the coup attempt by FETÖ, Küçük said: "Russia also knows that FETÖ is a threat. The Kremlin's statements after the attempted coup show that the CIA and the U.S. backed it."

"The U.S. tried so hard to help make Turkish-Israeli relations better. Did we see the Obama administration making efforts to better Turkish-Russian relations?" Nuriyeva asked, adding that Washington was pleased when relations between the two countries went sour.

"The downing of the jet and killing of the pilot were tools in a geopolitical plot," Dugin said. He claims that the failed coup attempt on July 15 was the joint work of FETÖ and the U.S.

It remains unknown what the investigation will reveal. However, Erdoğan's visit to Russia on Aug. 9 and a friendly football match between Turkey and Russia late August, which Erdoğan and Putin will watch together, will further improve ties.

As Washington fails to respond to Ankara's requests, made as part of a strong alliance and strategic partnership, Russia rises to the surface as a rational and likely new ally in the region.
RELATED TOPICS