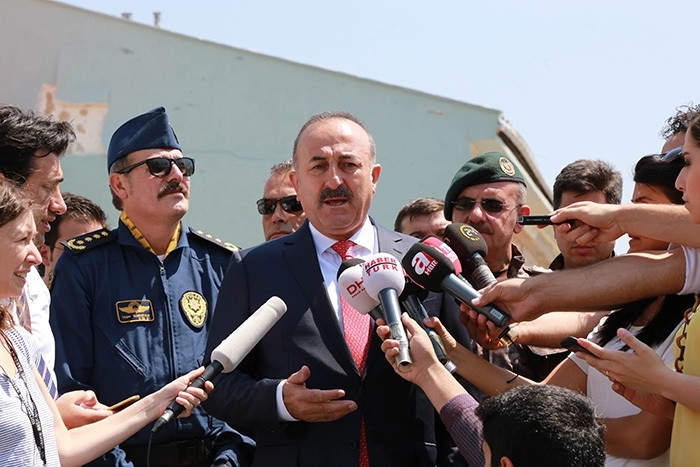 Foreign Minister Mevlüt Çavuşoğlu met with foreign media representatives on Friday and criticized the recent comments made by U.S. security officers on Turkey's fight against the Gülenist Terror Organization (FETÖ) following the recent failed coup attempt. Çavuşoğlu said that "limiting Turkey's military capacity to just the coup-attempting military officers when we're combating DAESH, the PKK and other terrorist organizations is ignorance, if no malicious intent exists." The head of U.S. Central Command (CENTCOM), Gen. Joseph Votel's statements expressing concerns over Ankara's efforts to clear the military of coup supporters would have an effect on U.S. operations in the region drew criticism from Çavuşoğlu, who described them as "unfortunate." Çavuşoğlu said the purge of coup plotters will only create a more trustworthy, dynamic and effective army in the fight against terrorist organizations.

Votel said some officers with whom the U.S. had relationships have now been imprisoned for their role in the coup attempt. "I am concerned that it will impact the level of cooperation and collaboration that we have with Turkey," he said. Çavuşoğlu described the remarks as "absurd" and underlined that "the Turkish military is not just composed of coup plotters dressed in uniforms."

"They [referring to Gülenist officers] are not the only ones that have the capacity to combat DAESH, the PKK and other terrorist organizations. We harshly reject [the U.S.'s] claims that only officers belonging to the 'parallel structure' fight DAESH," Çavuloğlu added. Providing information on the upcoming visit to the U.S., Çavuşoğlu told media members that there is a new, updated document established on FETÖ leader Fetullah Gülen that includes details and evidence on Gülen and his followers' involvement in the recent coup attempt on July 15. The minister said that though Turkey expects Gülen's extradition as soon as possible, he added that it may take some time. Additionally, Çavuşoğlu said that Turkey has informed U.S. officials on Gülen's plans to escape to another country and urged them to take measures against this.

Çavuşoğlu further drew attention to what he called the "biased" position Western allies have taken. "We are disturbed by our Western and European allies' approach to the situation [following the coup attempt]. Foremost, not many expressed their support against the coup until today. Rather than support us, various European politicians have made populist remarks and begun their statements with 'buts' and tried to give us a lesson in democracy lesson. They had even tried to threaten Turkey through their statements." He also reiterated the EU's recently increasing radicalism, Islamophobia and xenophobia and stressed that the EU has become the fortress of anti-Islamism. In regards to Turkey's normalization process with countries Ankara had fallen out with recently, Çavuşoğlu said Ankara is to continue its dialogue with those countries and said that its Western allies' criticism regarding Turkey's normalization process with Russia is "hypocrisy." Underlining that Turkey's bilateral relations with other countries are "not an alternative to each other," he ensured that Turkey's" multi-dimensional foreign policy" is to continue.