How is US a partner if it continues to harbor Gülen? Erdoğan asks 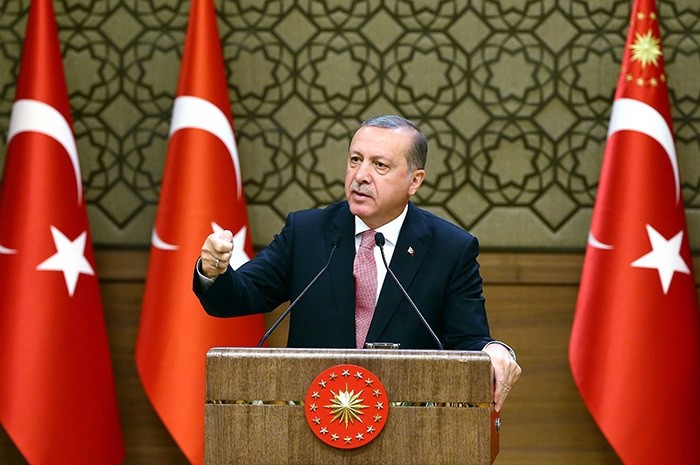 President Recep Tayyip Erdoğan slammed the U.S. administration on Tuesday for not extraditing the head of the Gülenist Terror Organization (FETÖ), Fethullah Gülen, who lives in self-exile in Pennsylvania.

Speaking in Ankara during a high level meeting with international investors, "What kind of partners are we if you request documents when we ask for a terrorist?" Erdoğan asked the U.S. administration who has been asking for evidence to extradite Gülen.

Suggesting that the July 15 failed Gülenist coup attempt had international linkages, President Erdoğan said, "The coup attempt had domestic actors, but its scenario was written abroad, however, they left this nation out of their equation."

President Erdoğan criticized German Chancellor Angela Merkel for not taking the necessary steps in the fight against FETÖ and other terrorist groups.

"I gave 4000 files to Chancellor [Merkel] regarding terror organizations, there was no response back," he said and added that the German judicial processes did function fast enough to tackle terror problems.

Commenting on Germany's ban imposed on President Erdoğan's videoconference connection to the pro-democracy rally in Cologne, he said that the judicial process worked quickly against him but not against the terrorists.

Erdoğan added that Turkey's western allies lacked support after the coup attempt by siding with the plotters.

"Unfortunately, the West supports terror and sides with coup plotters," he said.

Criticizing the U.S. administration for harboring the FETÖ ringleader Fethullah Gülen, Erdoğan said, "The main [financial] sources of Gülenists are charter schools operating within the U.S."