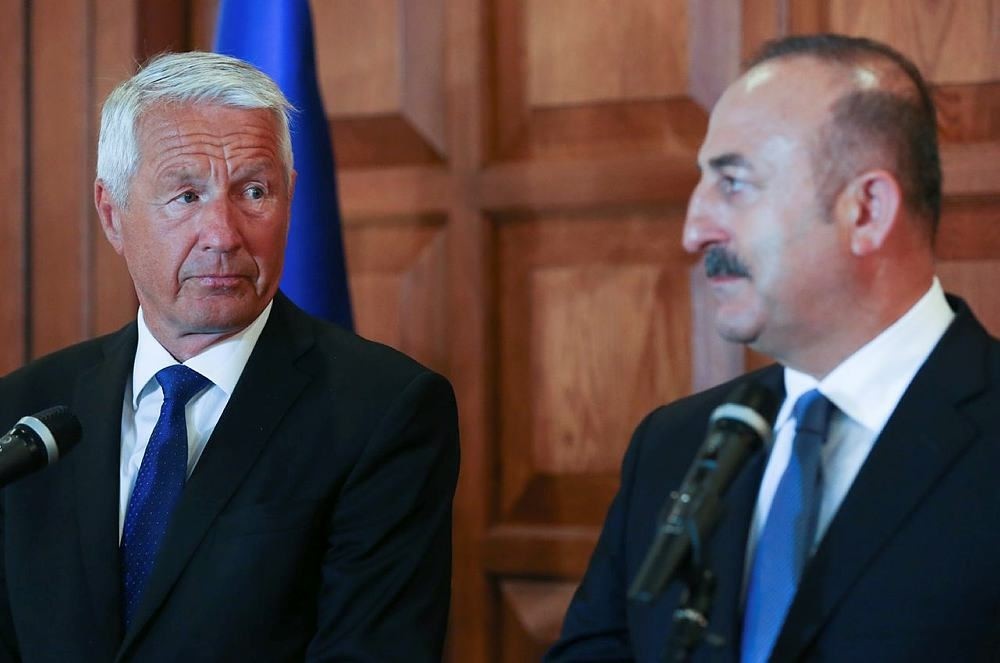 Foreign Minister Mevlu00fct u00c7avuu015fou011flu (R) held a joint press conference with the secretary-general of the Council of Europe Thorbjorn Jagland after their meeting.
by Merve Aydoğan Aug 04, 2016 12:00 am

Since the coup attempt, the EU and its institutions have not shown solidarity with Turkey, contrary to when then EU foreign affairs chief Ashton visited the leader of the Egyptian coup, el-Sissi, two weeks afterward. The Council of Europe sent its secretary-general to Ankara 19 days after the coup attempt in a show of ‘solidarity'

It has been 18 days since the failed, July 15 Gülenist Terror Organization (FETÖ) coup attempt that left 246 people dead and thousands of others injured, and any high-level European Union official is yet to visit Turkey. EU Foreign Affairs chief Catherine Ashton had visited Egyptian President Abdel-Fattah el-Sissi, who ousted Egypt's first democratically elected president, Mohammed Morsi, from his post after the bloody coup attempt, on the 15th day after the coup. Despite EU official's biased stance on the coup attempt in Turkey, the secretary-general of the Council of Europe, Thorbjorn Jagland, arrived in Ankara for official visits. Speaking at a joint conference with Jagland, Çavuşoğlu strongly criticized the EU and European media's stance on the coup attempt.

"The EU, European countries as well as European media must put an end to their faulty stance [on the coup attempt]. We do not ask them to be on our side rather urging them to be objective and balanced, honest."Although the Turkish public had already begun to lose faith in the EU due to matters in its ongoing accession process and visa-free travel, with the EU and its institution's stance on the July 15 coup attempt the EU is perceived as a giant organization of hypocrites as Turks perceive Western countries as favoring the junta in power rather than democracy. Çavuşoğlu strongly criticized the EU and said "The approach of the EU and many other European states, politicians and especially the media [toward the coup attempt] has been highly negative. It is not only our citizens' opinion but rather all of our opinion. Thus, the EU, European states and media must end the wrongful stance they have been holding until today."

Çavuşoğlu continued to say that Turkey will continue to inform the Council of Europe on the steps taken throughout the process, and added: "Turkey has not and will not appease the rule of law, human rights or democracy. … Turkey will strongly continue its reform process."

Adding on to Çavuşoğlu's remarks, Jagland expressed support for Turkey and its people for their stance during the coup attempt and said there had been insufficient understanding in Europe about the challenges faced by Turkey.

"I recognize that of course there is a need for taking on those who were behind this coup and also on this secret network [FETÖ]. I would like to say there has been too little understanding from Europe over what challenges this has caused to the democratic and state institutions of Turkey. We, however, have been informed about it for a very long time. So therefore of course we see a need for cleaning up all of this," Jagland said. He said that Turkey's membership to the Council of Europe would have been suspended if the coup attempt had succeeded.
RELATED TOPICS