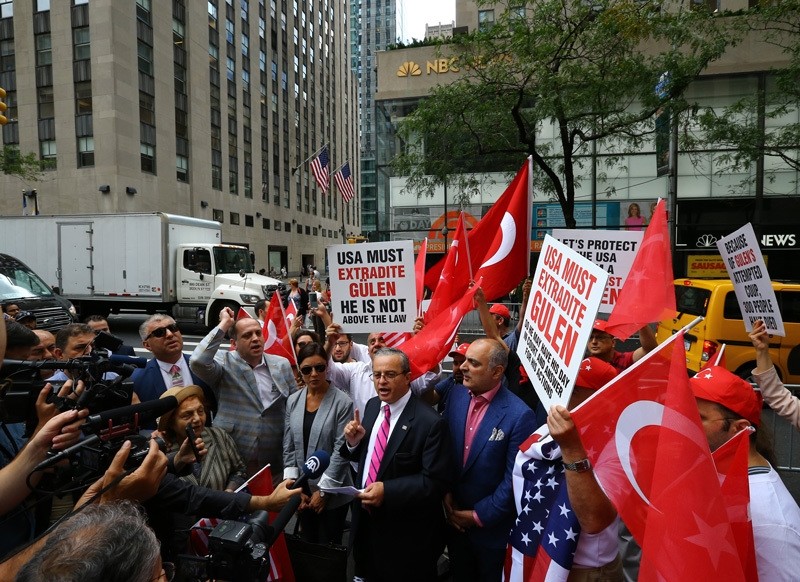 Turkish Americans and media members on Thursday demonstrated outside the world headquarters of NBC News in New York, slamming the organization for a false report on the night of a recent putsch attempt in Turkey.

NBC News set off a chain reaction that misled the world during the July 15 coup attempt when it posted tweets that were later deleted that claimed Turkish President Recep Tayyip Erdoğan fled Turkey and was seeking asylum in Germany.

The news organization cited an unnamed "senior U.S. military official" for having received the information.

The tweet went viral on social media and was widely used by traditional media organizations -- all of which sourced NBC News, carrying the false information to millions of readers, including Turks, at a critical time during the deadly coup bid.

Sibel Edmonds, a Turkish-American dual citizen and former FBI translator, told reporters in front of Rockefeller Plaza that NBC News was "no longer a news organization".

"It is an extension of Central Intelligence Agency and Pentagon; this is what they proved here," Edmonds said. "They actively and directly participated in a coup."

Edmonds, who is the founder of the National Security Whistleblowers Coalition, argued that by taking so long to apologize for a material error in its reporting, NBC News proved it was indeed not a mistake.

"If it was just an innocent mistake, all they had to do was to issue a statement" apologizing, and that would be an example of ethical journalism, she said.

"For two weeks, despite receiving mail, letters, from not only us but other journalists, they are refusing to do that. And what does that say? That says, NBC News corporation is no longer categorized under news agency."

The group attempted to contact the chairman of NBC News chairman and other top executives who were all given prior notice.

Protesters were met, however, by a security guard who said he would convey the group's message to his bosses.

"What the hell is going on there?" Assange said of the outlet's coverage the night of the attempted coup. "That went all around the world, and was used to further the chance of success of the coup," he said in reference to the report of President Erdoğan seeking asylum.