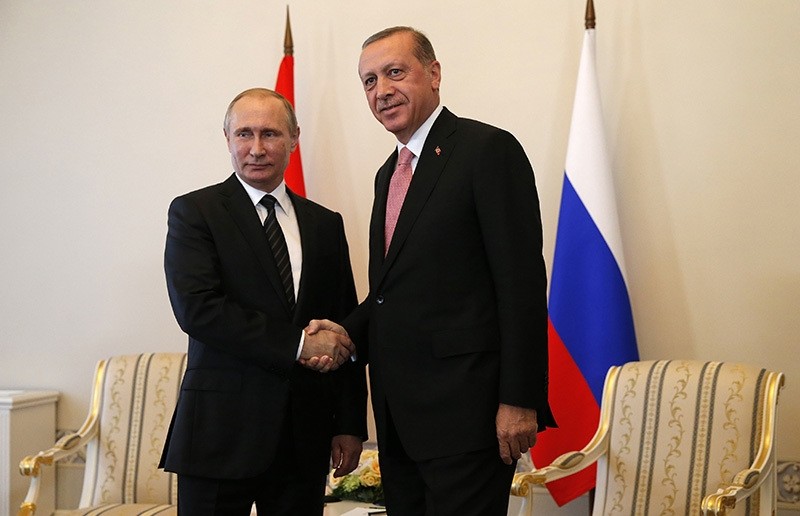 The first meeting between President Erdoğan and Russian President Putin since the downed jet crisis marks the beginning of a new era for relations. The two leaders stressed the willingness to collaborate on economic and regional issues

On his first foreign visit after the failed coup in Turkey, President Recep Tayyip Erdoğan thanked Russian President Vladimir Putin for inviting him to discuss mending their soured relations after the downing of a Russian warplane along the Syrian border last year. Speaking to press after a "positive meeting," the two leaders expressed their plans to normalize relations. "We discussed what we could do to go back to the way when our relations were strong. With new invesments, finalizing projects and bringing businesspeople from both countries together, we plan to increase our economic relations. Energy and energy related projects make up the majority of economic ties between the two countris," Putin said, adding that the Turkish businesses that were banned from working in Russia will be permitted back again.

Thanking Erdoğan for his visit, Putin said Turkey and Russia will work together for regional and global peace, explaning that the situation in Syria will be discussed in another meeting between the two leaders. Stressing that his first foreign visit abroad after the coup attempt is to Russia, Erdoğan said Turkey and Russia will work toward bringing relations to a decent level. "Turkish-Russian relations are important not only for mutual ties, but for solving global issues," Erdoğan said. Prior to the meeting Erdoğan said that Turkey's relations with Russia will enter a new phase following the normalization of ties between the two countries.

Putin said that the restoration of ties between the two countries will benefit the people of both countries. "Your visit today, despite a very difficult situation regarding domestic politics, indicates that we all want to restart dialogue and restore relations between Russia and Turkey," Putin said, also adding that he was one of the first leaders to call Erdoğan following the coup attempt on July 15.

"Russia is against all types of coup attempts," Putin said and added that he is pleased to have the opportunity to discuss a number of issues, including economic relations and counterterrorism measures, with Turkey. "I hope, under your management, the Turkish people will overcome this issue," he told Erdoğan.

Erdoğan said that the restoration of bilateral ties will also contribute to the resolution of various issues in the region. Erdoğan and his delegation received a warm welcome at the 19th-century Constantine Palace in the outskirts of St. Petersburg.

Daily Sabah met with Russian Ambassador to Ankara Andrey Karlov and discussed the visit. Karlov stressed that Russia always advocates collaboration that will benefit both countries and said that both leaders will take initial steps toward a similar disposition regarding the Syrian civil war. Underlining the importance of increasing cooperation between the two countries in the fight against DAESH, Karlov also said that extensive cooperation means swifter eradication of international terrorism.

Commenting on the failed July 15 coup attempt, Karlov reiterated that Russia supports the elected government in Turkey and is opposed to any unconstitutional action against the government. Regarding Gülen schools, Karlov said that Russia realized the structure of the school system and its intention long ago and therefore closed down all Gülen schools in 2006.

The involvement of two fighter jet pilots in the FETÖ coup attempt who downed a Russian jet in November, heavily damaging Turkish-Russian relations, became a matter of debate in Turkey's political agenda. Many argued that FETÖ, supported by the U.S., wanted to deteriorate Turkish-Russian ties through the downing of the jet. Putin's foreign policy consultant Alexander Dugin also claimed recently that the FETÖ pilots deliberately shot down the Russian fighter jet. Dugin alleged that the killing was exacted by forces trying to affect relations between the two countries.

On Nov. 24, two Turkish F-16 fighter jets on an aerial patrol intercepted a Russian warplane within rules of engagement when it violated Turkish airspace near the Syrian border. The Russian warplane received 10 warnings about its violation within five minutes before it was shot down. Later on, Erdoğan expressed regret for the incident to Putin on June 27.