FETÖ not only targeting ties with Russia, but with all countries, FM Çavuşoğlu says 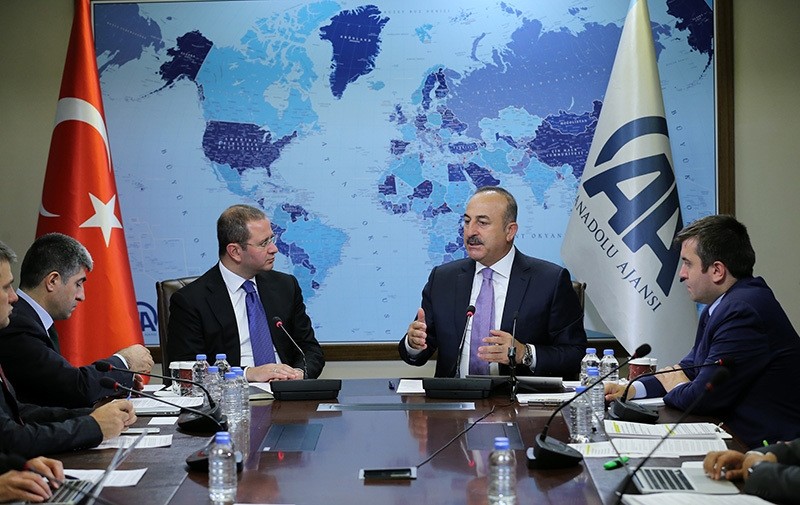 Foreign Minister Mevlüt Çavuşoğlu said on Wednesday that the Gülenist Terror Group (FETÖ) aims to disrupt Turkey's foreign relations. Speaking to the Anadolu Agency Editors' Desk, he said: "FETÖ is clearly trying to damage our relations with not only Russia, but with any foreign country possible." He also said that FETÖ was behind the downed jet crisis with Russia. Çavuşoğlu said that the Turkish pilots involved in the downing of the Russian warplane over the Syrian border on Nov. 24 of last year had both been arrested on suspicion of being involved in the recent coup attempt. "This is because of the allegation of being a member of FETÖ, not because they were involved in the incident," Çavuşoğlu said, underlining that the judiciary will evaluate the jet-downing incident case in every aspect.

Explaining that Turkey does not approve the Syrian government siege of Aleppo, on Tuesday Çavuşoğlu said Ankara and the Kremlin are on the same page concerning the cease-fire in Syria, humanitarian aid and the search for a political solution. Çavuşoğlu announced that Turkey would form a tripartite mechanism in regard to Syria, including a joint military, intelligence and diplomacy mechanism with Russia to replace separate ties established between these institutions. Çavuşoğlu said that a delegation from the Foreign Ministry, the Turkish Armed Forces (TSK) and the National Intelligence Organization (MİT) chief would be sent to St. Petersburg on Tuesday to hold a meeting at the ministerial level concerning the new tripartite mechanism.

Remarking that Turkey had been seeking a solution with its NATO allies, Çavuşoğlu said that Ankara had to increase cooperation on defense with other countries, as NATO let Turkey down. However, Çavuşoğlu said that the recent cooperation with Russia should not be perceived as a step against NATO, but as an increase in Turkey's international defense system, especially considering the ongoing PKK and DAESH attacks.

Increasing cooperation on defense was a crucial outcome on Tuesday's meeting between Turkish and Russian presidents and delegations. Regarding the long-awaited missile defense system, Çavuşoğlu said that Turkey first sought cooperation with NATO countries; however, so far the results were unsatisfactory.

"Therefore, it is normal for us to seek other alternatives. But we do not perceive this as a step against NATO. We need to set up our own defense system and develop my own technology in cooperation with other countries," Çavuşoğlu said.

Çavuşoğlu further expressed the dissatisfaction of the Turkish public with the West's reactions to the failed July 15 coup attempt. "Two-thirds of Turkish people want us to end the accession process with the European Union," he said, despite the government's efforts for the last 15 years to become a member of the 28-nation bloc. Çavuşoğlu claimed that Europe has been encouraging the putschists by interrogating Turkey by asking about the purges and liquidations. "Should we let FETÖ members stage another coup attempt rather than liquidating them?" Çavuşoğlu asked, adding, "The EU has failed the class concerning the coup."

Çavuşoğlu also said that Turkey is following Egypt and FETÖ's efforts to develop relations, but there is not any concrete information on whether FETÖ leader Fethullah Gülen will try to go to Egypt to evade possible extradition from the U.S. to Turkey.

Turkey says the coup attempt was organized by supporters of U.S.-based imam Fetullah Gülen and has called for his extradition, another source of Turkey's exasperation with the West.

The shooting down of the Russian jet led to a freeze in relations, including economic sanctions and a bar on Russian tourism to Turkey, that only thawed in June when Erdoğan wrote to his counterpart and the two later spoke by telephone.

On June 30, Russia lifted a ban on tourist flights and Çavuşoğlu met Russian Foreign Minister Sergey Lavrov in the Russian city of Sochi on July 1.

Putin gave his support to Turkey over the coup attempt and said he stood by the elected government, offering his condolences to the victims of what Erdoğan called the "most heinous" armed coup attempt in modern Turkish history.