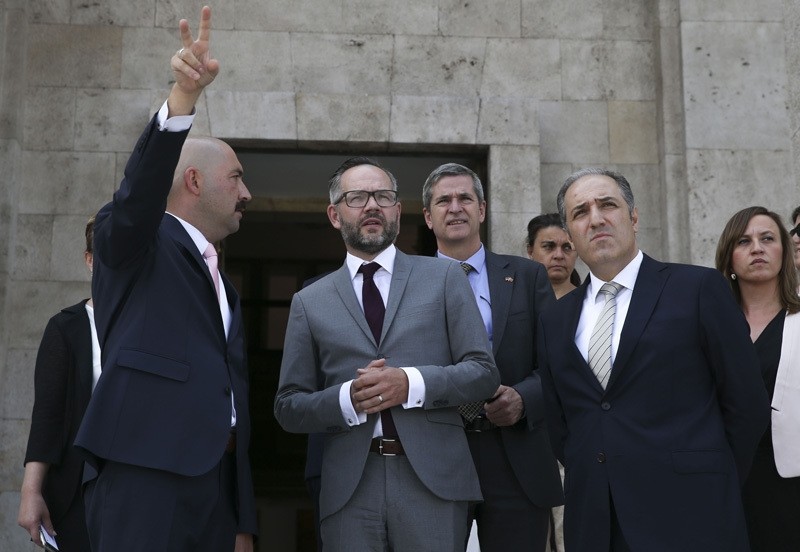 Chairman of Parliament's Human Rights Investigation Commission Mustafa Yenerou011flu (R) gives tour of the bombed Turkish Parliament to German Minister of State for Europe Michael Roth (M) along with his delegation on August 26, 2016. | AA Photo
by Anadolu Agency Sep 08, 2016 12:00 am

A Turkish lawmaker has slammed the EU for failing to show solidarity with Turkey following a recent failed coup here, saying the attitude of many European states would be different if the same thing happened in their countries.

The remarks by ruling Justice and Development (AK) Party deputy Mustafa Yeneroğlu came as he evaluated the July 15 post-coup bid developments overseas in an exclusive interview with Anadolu Agency.

"A terrorist organization attempts to overthrow a government, but the European countries wait first," Yeneroğlu said, emphasizing that the initial reactions were indifferent toward the deadly putsch attempt.

Yeneroğlu, who chairs parliament's Human Rights Investigation Commission rejected western criticism of a nationwide purge of Turkey's military and other state institutions after the coup.

"If the coup attempt happened in any European countries, all those states would adopt totalitarianism model, they would give a totalitarian reaction," he said.

Turkey has criticized European leaders for voicing concerns regarding investigations into the overthrow attempt.

The July 15 coup attempt was organized by rogue members of the military who are followers of U.S.-based terror leader, Fetullah Gülen, and his Gülen terror-cult (FETÖ), according to testimonies from suspects. The defeated coup left 240 people martyred and nearly 2,200 injured.

Many European capitals condemned the coup attempt but their focuses quickly shifted to concerns about investigations as a large number of FETÖ suspects were arrested or suspended from state institutions.

To date, more than 81,000 suspects have suspended from their posts over alleged links to FETÖ.

Turning his attention to Germany, Yeneroglu said it remained a key partner for Turkey. That despite the relationship being recently harmed by an Armenian genocide resolution that was passed in the German parliament and the country's PKK policy that has allowed the terror group to operate via a number of proxy associations

"There are over 3 million Turks in Germany. Turkey has the highest trade volume with Germany, as well as the studies on cultural cooperation," Yeneroğlu said.

It is unacceptable to Turkey that Germany permits PKK supporters inside its country above objections from Ankara -- a development he warned would have consequences.

"PKK is designated as a terrorist organization in Germany, but Germans follow wrong policy towards the group," Yeneroğlu said, adding that Germany should adopt a more decisive attitude toward Turkey's sensibilities.

"Or this process will harm Turkey-Germany relations," he said.

The PKK -- also listed as a terrorist organization by the U.S. and the EU -- resumed its 30-year armed campaign against the Turkish state in July 2015.

Nearly 600 security personnel, including troops, police officers, and village guards, have since been martyred, and more than 7,700 PKK terrorists neutralized in operations across Turkey and northern Iraq.