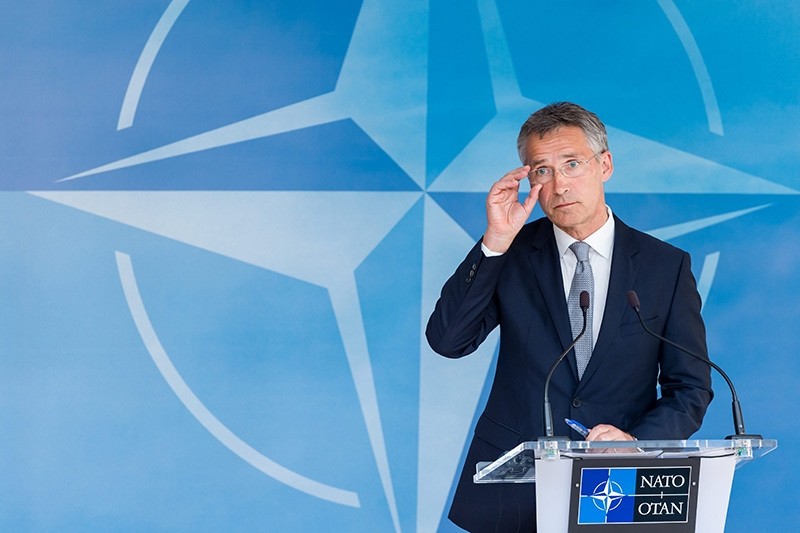 NATO Secretary-General Stoltenberg paid a two-day visit to Ankara where he met with Turkish officials on the Syrian crisis and the fight against terror. Stoltenberg stresses the importance of local forces in fighting terrorism

As Turkey continues to support the Free Syrian Army (FSA) with Operation Euphrates Shield in northern Syria in their fight against DAESH and other terrorist organizations, NATO Secretary-General Jens Stoltenberg acknowledged the importance of training and equipping local forces to be successful in the fight against international terrorism. "I would like to underline that NATO plays a key role in the fight against terrorism but NATO is not the only answer. We need the police, local intelligence and many kinds of civilian tools in the fight against terrorism,'' Stoltenberg said at a press briefing with Turkish Foreign Minister Mevlüt Çavuşoğlu on Friday evening at the end of his two-day visit to Ankara. Stressing that NATO's success in Afghanistan is connected to building a strong Afghan national army, Stoltenberg also underlined the importance of local forces in the fight against terrorism. ''I believe that in the long run it's expected that we must train local forces to equip them with the skills needed to fight terrorism, enabling them stabilizing their own country rather than NATO deploying a large number of troops for combat operations. This is exactly what we have been doing in Afghanistan and other countries,'' he added.

At the press briefing, Turkish Foreign Minister Mevlüt Çavuşoğlu also emphasized that Operation Euphrates Shield in Jarablus was saved by the local forces. ''Local forces who saved Jarablus and the region are actually people from the region and after the operation life started to return to normal in that area." Stoltenberg paid a two-day visit to Ankara after the July 15 failed coup attempt where he met with President Recep Tayyip Erdoğan, Prime Minister Binali Yıldırım, Foreign Minister Çavuşoğlu and Defense Minister Fikri Işık along with other high-level Turkish officials. After meeting with President Erdoğan late on Thursday, Stoltenberg said a "strong and democratic Turkey is essential for the stability and security of Europe and the region, any attack on democracy, in any of our countries, is an attack on the very foundation of our alliance." Stoltenberg also visited the Turkish Parliament, which was bombed by members of the Gülenist Terror Group (FETÖ) during the July 15 failed coup attempt: "It was extremely touching to see these ruins. At the same time it was very impressive for me to see the faith in democracy shown by the Turkish people." Stoltenberg said during his visit to Parliament that "This coup attempt was not only against Turkish democracy but also targeted NATO allies and the very heart of NATO values."

Speaking to the press with Çavuşoğlu, Stoltenberg also thanked Turkey for its contributions to NATO. ''I thank Turkey for its contributions to many different NATO operations and activities. You have contributed to our efforts to fight international terrorism and you are stepping up efforts to fight against DAESH and all terrorist organisations. We have to stand together and fight against international terrorism," he said.''As Turkey stands with NATO we stand with Turkey and we have increased our military presence in Turkey," he added.

Early Friday, Stoltenberg also gave an interview to Turkish NTV network where he stressed his support for Turkey's efforts against DAESH and said that Ankara is entitled to defend itself. "We welcome Turkey's increasing efforts to fight against DAESH. Turkey has a right to defend itself. There have been many terrorist attacks coming from the Syrian side," Stoltenberg said. "We must train local forces in Syria to fight terrorism and ensure stability in the county." he stressed.

Stoltenberg previously made another visit to Turkey April 20-21 this year to discuss preparations for the Warsaw Summit to be held from July 8-9. Jens Stoltenberg will visit Turkey this November.