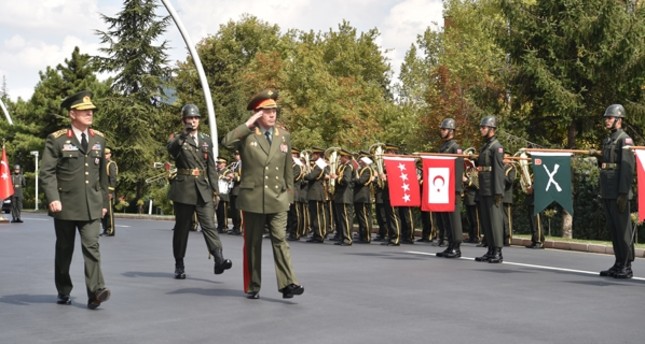 The hotline established between the Russian and Turkish militaries in the last month is effectively increasing military cooperation between the countries and preventing the recurrence of prior incidents, such as the Nov. 24 jet crisis on the Turkish-Syrian border.

Turkish General Hulusi Akar met with his Russian counterpart, General Valery Gerasimov, on Thursday, hinting that further military collaboration regarding the Syrian crisis are on the horizon, as the two generals discussed the latest developments in Syria and bilateral military cooperation. One of the key results of the meeting was to strengthen the hotline between the two countries, which was reestablished last month after having been non-functional since the downing of a Russian Su-24 bomber by Turkish jets for violating Turkish airspace in November last year.

The opening of the hotline indicates continuous lines of communication between the chiefs of staff of both countries and air force officers, Special Forces and intelligence agents of both countries regarding Syria.

The meeting was the highest-level military contact between the two countries since the jet crisis last year. Gen. Valery Gerasimov's presence in Ankara is considered a significant symbol of mended ties between Turkey and Russia.

Although the Kremlin is one of the main backers of the Assad regime and Turkey backs the opposition Free Syrian Army (FSA), both sides are targeting the DAESH terror organization in Syria. Meanwhile, the Turkish Armed Forces (TSK), partnering with the Free Syrian Army (FSA), initiated Operation Euphrates Shield on Aug. 24, successfully liberating the town of Jarablus in northern Syria of DAESH.

Relations between Turkey and Russia hit an all-time low in November 2015 after the jet crisis and relations remained sour until the issue was largely resolved on June 29 after a letter and subsequent telephone calls were made between the two countries' leaders.

Russian President Vladimir Putin gave his support to Turkey after the July 15 failed coup attempt and said he stood behind the elected government, offering his condolences to the victims of the attempt. On July 22, Russia also lifted restrictions on flights to Turkey, which had been implemented temporarily following the coup attempt, after Turkish officials assured their Russian counterparts that additional security measures were being taken.

Share on Facebook Share on Twitter
Previous in Diplomacy Sait Yayla's, a former police chief who was suspended from duty due... Next in Diplomacy Three Americans killed while fighting with the PKK’s Syrian offshoot...
DAILY SABAH RECOMMENDS